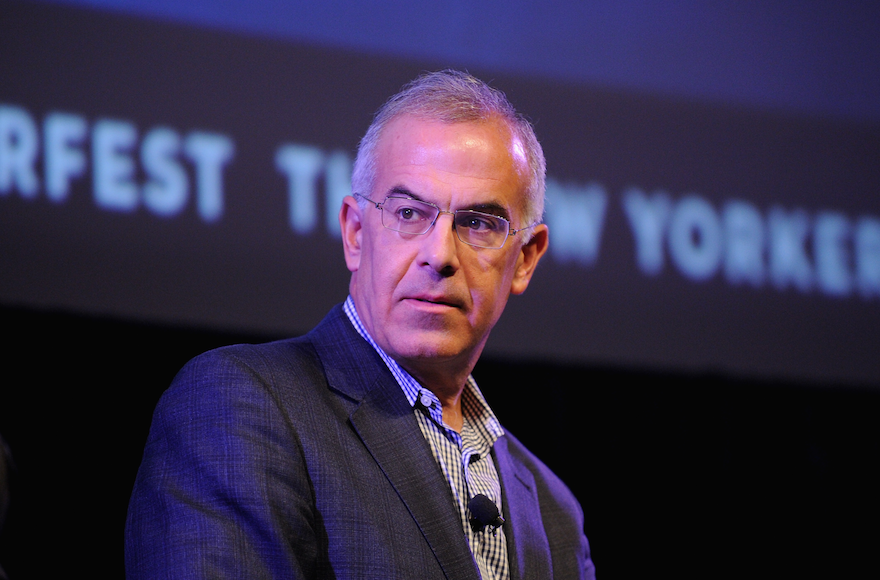 David Brooks speaks on stage at the The New Yorker Festival 2014 on October 19, 2014 in New York City. (Bryan Bedder/Getty Images for The New Yorker)
Advertisement

(JTA) — It’s surely a question many of David Brooks’ fans and readers have had over the past few years, since his marriage to a Christian woman and his frequent references to a bevy of Christian theologians: Is he still Jewish?

The answer, as he told The Washington Post in a recent interview, is yes — but he’s also Christian.

Brooks, now 57, calls himself a “wandering Jew and a very confused Christian.” He said he feels “more Jewish than ever before,” but cites Jesus’ Beautitudes as the “ultimate road map for life.”

So is he a Messianic Jew then?

“He said he doesn’t know enough about it, but he would probably say no,” Sarah Pulliam Bailey wrote in the Post.

The New York Times columnist’s new book, “The Second Mountain: The Quest for the Moral Life,” describes his spiritual twists and turns, as well as his second marriage to his former assistant, a religious Christian. Brooks doesn’t agree with Christianity on everything, such as the opposition to same-sex marriage among many of its practitioners, and his belief in the resurrection of Jesus “comes and goes,” he said.

Rabbi Gil Steinlauf, who was rabbi of Washington, D.C.’s Adas Israel congregation when Brooks was once a member, said Brooks is living a “dramatic contradiction.”

“Do Jews cares that there is someone who is a celebrity who is also talking about a deep relationship with Christianity?” said Steinlauf. “Of course Jews are going to have strong feelings about that. He’s one of our own.”