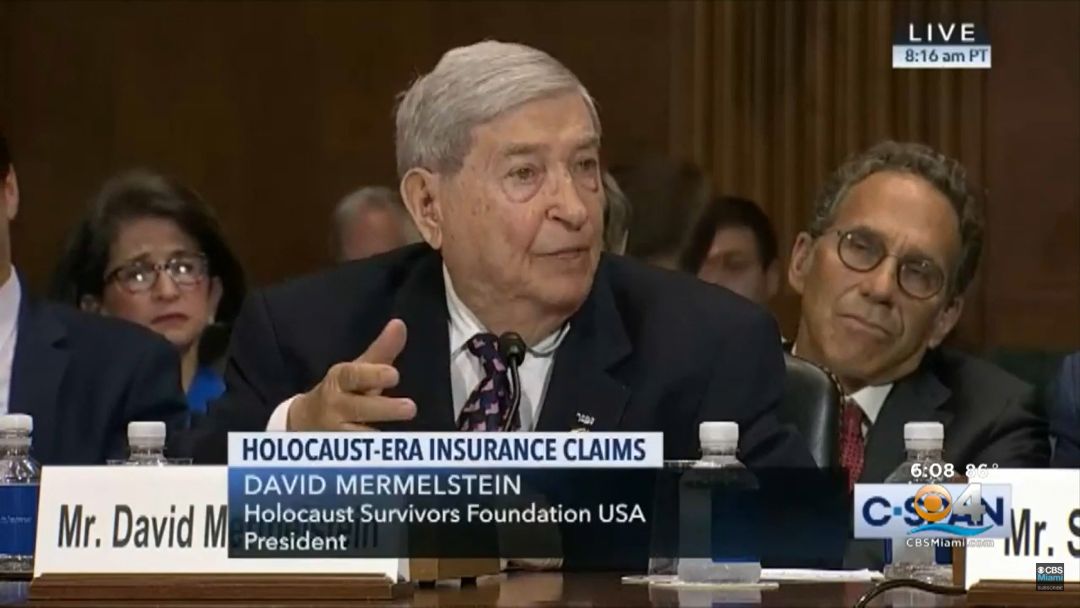 (JTA) — David Mermelstein started a group for Holocaust survivors in the Miami area in the 1950s simply because it was so hard communicating with others — even fellow Jews — about the horrors they had experienced.

Like so many other survivors, as he aged, Mermelstein overcame his reluctance to speak about it and made communication his forte, whether it was speaking to schoolchildren about World War II or forcefully testifying before Congress to extract what he believed to be more equitable restitution for survivors.

Mermelstein died on Tuesday at 92, said Sam Dubbin, the lawyer who frequently represented Mermelstein’s groups in efforts to get restitution.

Mermelstein described the foundations of the Holocaust Survivors of Miami-Dade County, a group which he led as president, in an undated letter Dubbin provided to the Jewish Telegraphic Agency.

“In the 1950s, soon after we moved to Miami,” Mermelstein said of himself and his wife, Irene, “we became part of a group of survivors called the New American Jewish Club. We started the group because it was very difficult for survivors, especially in the early years, to make close friendships and socialize with others who didn’t live through what we did. So we found and spent our time with each other.”

The group was soon fundraising for members who were in financial trouble and for Israel. It eventually merged with other area groups to become the Holocaust Survivors of Miami-Dade County. By the 1990s, Mermelstein found himself speaking frequently at schools, churches and synagogues, and to local media. He traveled to Poland to join the March of the Living organization with a local CBS affiliate in 2012.

He also became an outspoken advocate for restitution, and with Dubbin helped lead the successful legal battle to force the U.S. government to pay $25 million in 2005 in restitution for a train full of Hungarian Jewish property looted by the Nazis in 1945 and confiscated by U.S. troops. The U.S. government had made no effort to return the loot to its owners.

Mermelstein was an outspoken critic of restitution efforts, excoriating the Conference on Material Claims Against Germany for using restitution money to pay for education projects when there were survivors who were still in need. He also helped lead a years-long legislative battle to reopen claims against insurance companies who failed to pay out on Holocaust-era policies.

The insurers, the relevant governments, and some Jewish groups say claims were equitably settled by the mid-2000s in a process launched in the 1990s by multiple governments, called the International Commission on Holocaust Era Insurance Claims. Mermelstein and other critics said ICHEIC’s terms were too favorable to the insurers, and that the agreement embedded in the ICHEIC arrangement to shut off further claims was outrageous.

“Survivors are in shock that the U.S. government took away our rights to go to American courts to make our claims,” Mermelstein testified in Congress in 2019, when he was 90. “Remember, these are contracts – not charity. How would those State Department and Justice Department people, and those judges, feel, if they lost everything, and then their own government said they couldn’t even go to court like every other American citizen to collect on an insurance policy their father paid for? They wouldn’t stand for it, and we won’t either.”

The Forward in its obituary said Mermelstein was born in 1928 in Kevjazd, Czechoslovakia. He and his family were deported to Auschwitz in 1944, and he was the only survivor.

Mermelstein established a dry cleaning business in Miami and was involved in the area’s Jewish community, raising funds for numerous causes. He is survived by his wife of over 70 years, Irene, who is also a survivor, three children, three grandchildren, and a great-grandson.