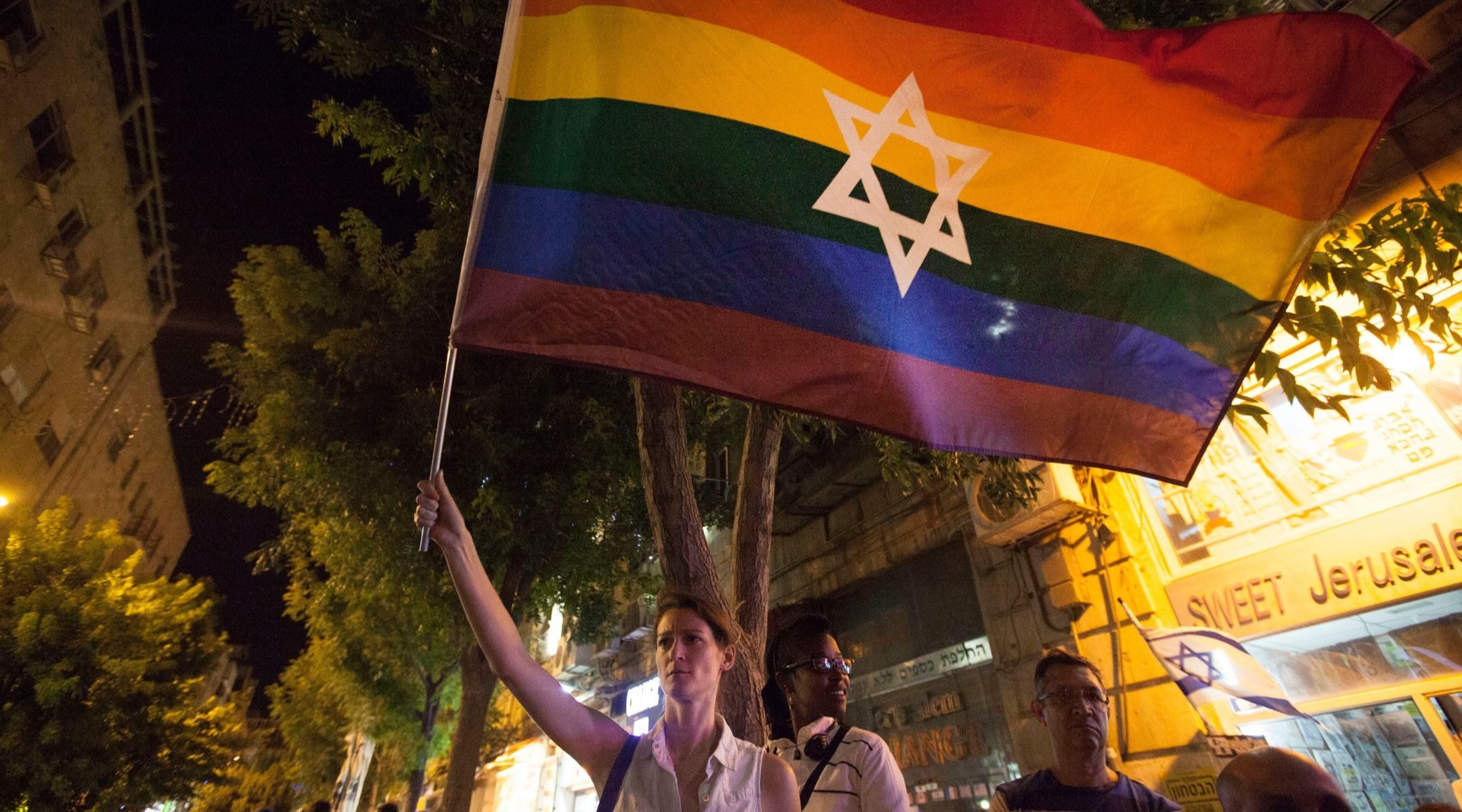 A woman waves a Jewish Pride flag in Jerusalem on Aug. 1, 2015. (Photo by Omer Messinger/NurPhoto via Getty Images)
Advertisement

(JTA) — The DC Dyke March is returning after a 12-year hiatus, with a new request: no “nationalist symbols” including flags and banners that represent “nations that have specific oppressive tendencies.”

This includes the Jewish Pride flag of rainbow colors with a white Star of David in the middle, which organizers say too closely resembles the flag of Israel.

Palestinian flags will be welcome, however.

The march will take place on Friday, a day before the annual Capital Pride Parade. Its theme is “displacement.”

Yael Horowitz, a Jewish organizer of the D.C. march, told the Washington Post that “pro-Israel and pro-Jewish are very different things.”

She said in a Facebook message “Jewish stars and other identifications and celebrations of Jewishness (yarmulkes, talit, other expressions of Judaism or Jewishness) are welcome and encouraged. We do ask that participants not bring pro-Israel paraphernalia in solidarity with our queer Palestinian friends.”

The decision to ban Jewish Pride flags comes two years after three women were asked to leave the 21st annual Chicago Dyke March after being told that their rainbow flags with a white Star of David in the center would be a “trigger,” or traumatic stimulus, for people who found them offensive. The women reportedly were asked to leave after they started defending Israel and Zionism.

A coalition of LGBTQ, Jewish and feminist organizations on Wednesday in a statement called on the DC Dyke March “to apologize to the community, and reverse course by allowing Dykes wishing to carry all Jewish and Israeli symbols to march as their full, authentic selves.”

“The DC Dyke March should know better than to stoke the flames of division and pain by driving a wedge between Queer Arabs and Jews at a time we must stand united against homo- and transphobia, anti-Semitism, and Islamophobia. We hope that they will do better––for the sake and advancement of all of our communities,” read the statement signed by A Wider Bridge, JCRC of Greater Washington, and Zioness.

The Anti-Defamation League called the Dyke March’s decision “outrageous” in a statement.

“Banning the Star of David in their parade is anti-Semitic, plain and simple,” said its national director, Jonathan Greenblatt.