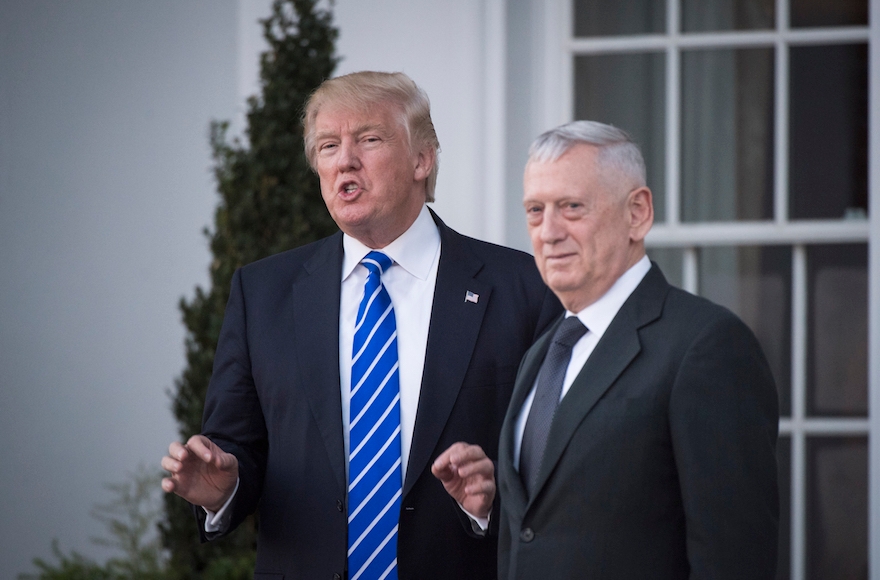 WASHINGTON (JTA) — In a letter calling for a policy of treating allies with respect and enemies and rivals with caution, Defense Secretary James Mattis said he would quit his post, days after President Donald Trump launched the withdrawal from Syria of U.S. troops.

Mattis in his resignation letter leaked Thursday to media did not mention the Syria pullout, but he did suggest that his differences with Trump had to do with Trump’s alienating allies and his conciliatory attitude to U.S. rivals.

“My views on treating allies with respect and also being clear-eyed about both malign actors and strategic competitors are strongly held and informed by over four decades of immersion in these issues,” Mattis said. “Because you have the right to a Secretary of Defense whose views are better aligned with yours on these and other subjects, I believe it is right for me to step down from my position.”

A number of Democrats and Republicans and foreign policy conservatives have taken to social media to express concerns that Trump’s abrupt pullout leaves Syria vulnerable to expanding Iranian influence in the country. Iran and its Lebanese ally, Hezbollah, have helped prop up the Assad regime in Syria’s seven-year civil war.

Israeli Prime Minister Benjamin Netanyahu has said that in any final status outcome in Syria, the Iranians must leave.