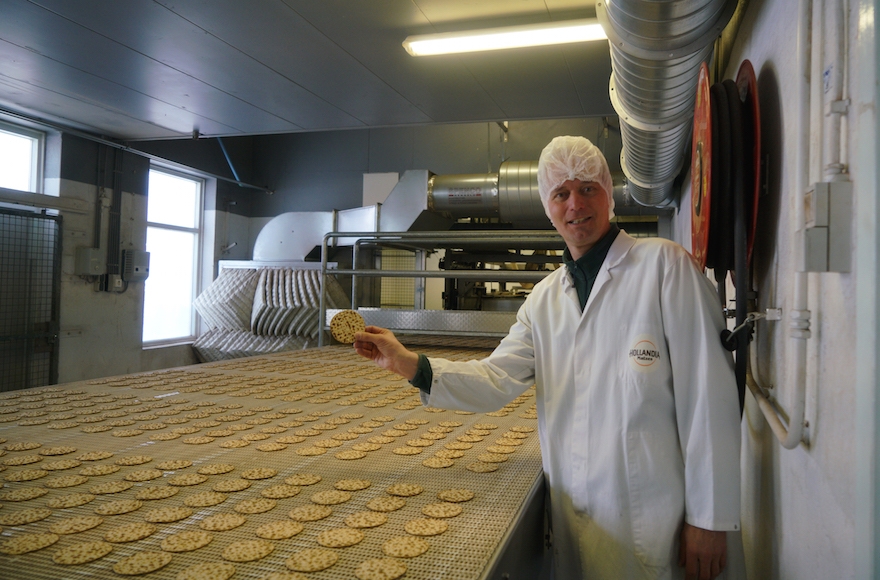 Pieter Heijs shows one of the products of his Hollandia Matzes factory in Enschede, the Netherlands, March 19, 2018. (Cnaan Liphshiz)
Advertisement

AMSTERDAM (JTA) — Some 35,000 schoolchildren in the Netherlands got free matzah from the only matzah factory in the country as part of the bakery’s nearly 50-year-old tradition.

Hollandia Matzes, a business with about 20 employees whose owners are not Jewish, invited schools from across the country’s east to pick up the product for their students at its headquarters in Enschede, a city situated 70 miles east of Amsterdam, RTV Oost reported Wednesday.

Each student was allotted two pieces — some 70,000 matzahs.

The Passover giveaway to schools started in 1962, when the factory was still owned by the Woudstra family, the factory’s last Jewish owners. They sold the factory in 2004 to the current owners, Peter Heijs and Udo Karsemeijer.

The Woudstras founded Hollandia in the 1930s when Enschede, a former center for the textile industry, had thousands of Jewish residents, including many who fled Nazi Germany.

Matzahs are a household item that is consumed year-round in the Netherlands, which has had a visible and well-integrated Jewish minority for centuries. Hollandia was one of the first large bakeries that began operating after World War II thanks to American cash injections to Europe. This increased its popularity in the Netherlands.

Most of the matzahs produced by Hollandia are not certified as kosher, but the factory also makes kosher-certified matzahs especially for Passover and even shmurah matzah, a handmade variant that is made under the strictest conditions, for Jewish clients.