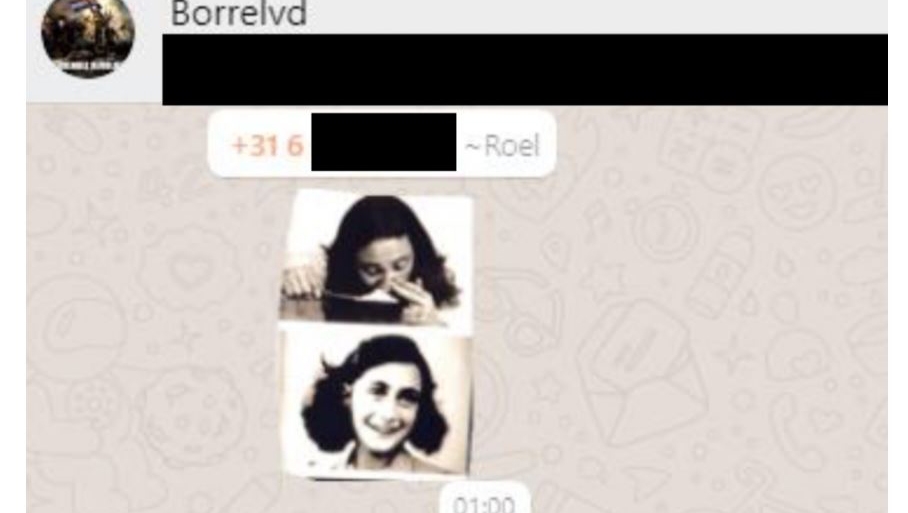 A screenshot of the meme of Anne Frank shared on the WhatsApp group of the young supporters of the Forum for Democracy party in the Netherlands. (HPDeTijd)
Advertisement

The HP/DeTijd magazine reported Wednesday on the contents of the WhatsApp group of some supporters of the Forum for Democracy’s young adult department. The party is the second-largest in the Dutch senate with 10 of the 75 seats.

The meme uses a well-known portrait of Anne, a Jewish teenage diarist who died in a German Nazi camp in 1945 after spending two years in hiding in Amsterdam with her family, of her smiling while looking up.

In the meme, it is preceded by an image of a similar-looking girl appearing to snort white powder from a spatula, creating the impression that Anne’s smile is connected to drugs.

In another message, one user wrote: “Jews are incredibly afraid of Whites. That’s why all the news organizations, led predominantly by Jews, are so busy spread anti-White rhetoric.” It was an answer to the question: “What is their interest in weakening us?”

Other remarks praised National Socialism and Anders Behring Breivik, a Norwegian ultranationalist who in 2011 killed 69 participants of a socialist event.

In a statement, Forum for Democracy called the remarks “ridiculous and damaging.” Of several authors of offensive texts, only one was officially a member and was suspended of any leadership role pending a review, the Forum said.