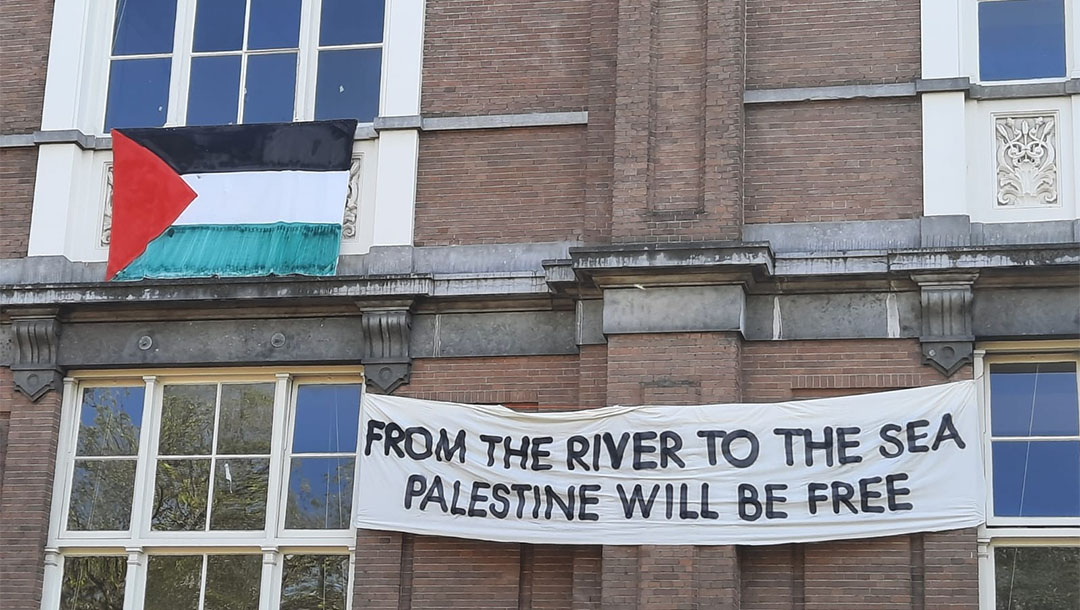 A banner about Israel hangs on the facade of the De Ateliers arts institution in Amsterdam, May 28, 2021. (Barry Mehler)
Advertisement

AMSTERDAM (JTA) — A public Dutch university removed a series of banners about Israel made by resident artists, including one reading “from the river to the sea,” after protests by local Jews.

The State Academy of Fine Arts in Amsterdam was “not aware of some of the meanings of the phrase and have decided, with the resident artists who displayed banners on the subject, to remove them,” Emily Pethick, the Academy’s director, told the Jewish Telegraphic Agency on Tuesday. “We deeply regret it.”

The slogan is an abbreviation of the phrase “From the river to the sea, Palestine will be free,” which refers to the area between Jordan River and the Mediterranean Sea — a region comprising the West Bank and Gaza and Israel. Advocates of the slogan say it calls for freedom for all inhabitants. Critics say it references the widespread sentiment among Palestinians that all the land is occupied and should be liberated by dismantling the Jewish state.

“This chant isn’t about supporting a Palestinian state but all about expelling the Jews from Israel. This will never happen,” wrote Ronny Naftaniel, chairman of the Central Jewish Board of the Netherlands, or CJO, on Facebook.

“One Final Solution was enough,” he added, referencing the Nazi euphemism for the Holocaust.

A separate arts institution in Amsterdam, De Ateliers, which is housed in the Academy’s former address, also displayed banners about Israel last week, including one reading “From the river to the sea, Palestine will be free.” De Ateliers did not immediately reply to JTA’s request for comment.