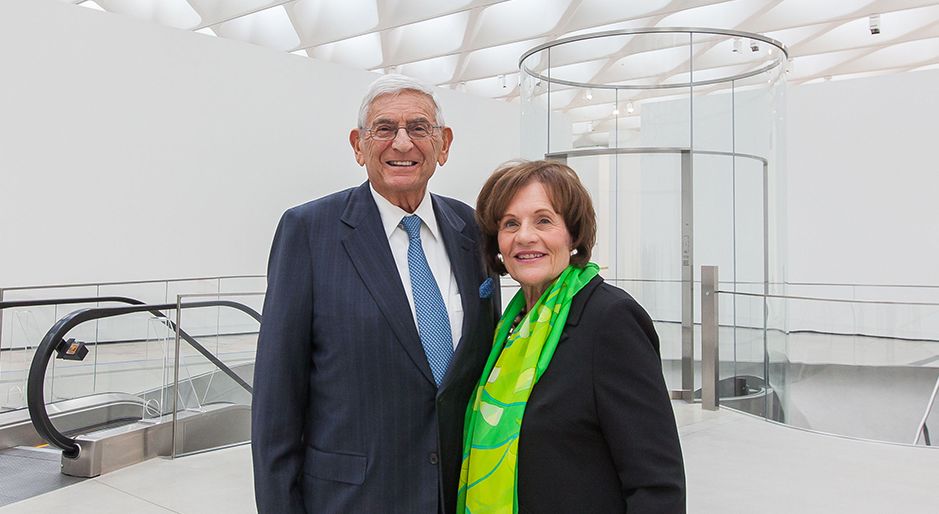 Eli and Edythe Broad in an undated photo on the Broad Foundation website.
Advertisement

(JTA) — Eli Broad, the Jewish philanthropist who strove to reshape Los Angeles as an international culture capital and also gave to Jewish causes, has died at 87.

Broad died Friday, a spokeswoman for the Eli and Edythe Broad Foundation told The New York Times. She did not name a cause.

Broad, who became a billionaire in the building and insurance businesses, is best remembered for helping start the Los Angeles Museum of Contemporary Art and the Broad, an art museum he named after himself, and for pouring money into several of the city’s other cultural institutions.

He was also deeply influential in education policy, creating a program — the Broad Academy — that trained school and district leaders to incorporate ideas from the business world. The program, and the leaders who graduated from it, made Broad’s name synonymous with a brand of school reform despised by teachers unions.

Broad, who was born in the Bronx and raised in Detroit, he also gave significant sums to Jewish causes, including the Jewish Federation of Los Angeles, eJewish Philanthropy reported.

In 2007, Broad gave $1 million to the National Museum of American Jewish History in Philadelphia. He also gave to the Peres Center for Peace and Innovation, a nonprofit founded by late Israeli President Shimon Peres aimed at fostering cross-cultural ties in the Middle East through economic and leadership programs.

He was notorious among charities for micromanaging his projects and withdrawing pledged funds if he did not believe the charity was meeting the goals he set.

“When Eli gives, it is like negotiating a business deal,” Lynda Resnick, a fellow board member on the Los Angeles County Museum of Art, said in the Times 2010 profile of Broad. “It is not altruistic. It is not blind charity. And there is a difference between being generous and being charitable. But it doesn’t matter in the end because the good was still done.”

The Broad Institute was founded in the 2000s to consolidate informal genome research coordination between Harvard and MIT scientists. Broad and his wife have given the institute hundreds of millions of dollars, and the institute has become a leader in testing for COVID-19.

The Broads signed The Giving Pledge in 2020, a commitment launched to get billionaires to give away at least half their fortune during and after their lifetimes.

“We are deeply saddened by Eli’s death, but we find some comfort in knowing that his generosity will continue to be an inspiration for all who benefit from the 50 plus years of support for art museums, theaters, educational institutions, or medical research,” his foundation said in a statement.

Broad often said he chose to settle and give to Los Angeles because it was relatively young and had a fledgling establishment that did not shun those born without wealth, or who do not belong to the right religion.

“You can come to this city as I did 40 some odd years ago without the right background, familywise, politically, religiously, and be accepted if you’re willing to work hard, have good ideas, and make things happen,” he told the L.A. Times in 2010.