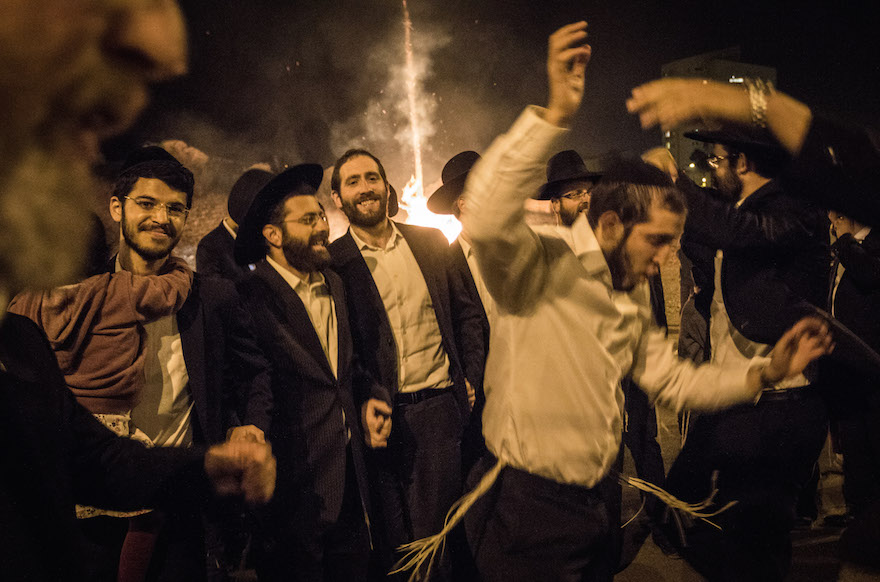 Haredi Orthodox Jews dancing near a bonfire during celebrations of the Jewish holiday of Lag Ba'Omer in Jerusalem, May 25, 2016. (Zack Wajsgras/Flash90)
Advertisement

Temperatures on Wednesday hovered in the high 90s and are forecast to climb as high as 110 to 115 Fahrenheit by Friday throughout most of the Jewish state. The hot and dry weather has led to fears of widespread fires.

Israel’s Fire and Rescue Service announced that bonfires only be lit in areas designated by local municipalities. Bonfires are also banned in national parks and nature preserves, several of which were closed outright ahead of Lag b’Omer.

Lag b’Omer, which began in Israel on Wednesday night, marks the 33rd day of the counting of the days between the holidays of Passover and Shavuot. It also marks the end of a minor mourning period recognizing the deaths of thousands of students of the second-century C.E. sage Rabbi Akiva.

Traditional bonfires and other activities at the tomb of Rabbi Shimon Bar Yochai on Mount Meron will be held as scheduled due to a special waiver from the Fire and Rescue Service. Lag b’Omer is the yartzheit of the rabbi, who was a disciple of Rabbi Akiva. (One interpretation says the bonfires are a symbol of the light he brought into the world.) Tens of thousands of mostly haredi Orthodox Jews converge on Meron on Lag b’Omer and spend the entire night and the following day lighting bonfires, giving first haircuts to boys turning 3 and celebrating.

Last year, the Fire and Rescue Service banned bonfires in great swaths of northern and central Israel due to a heat wave, which also included windy conditions.