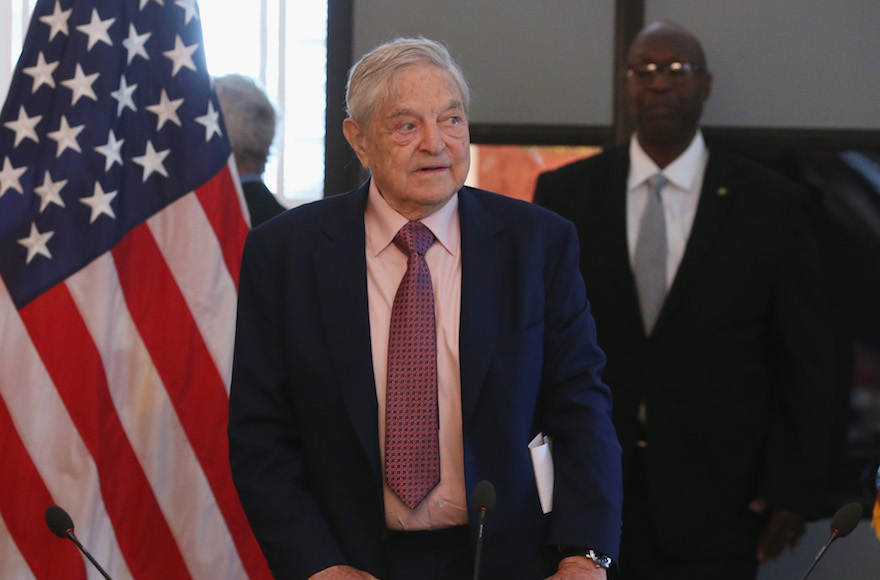 George Soros at a meeting of American business leaders at the Blair House in Washington, D.C., May 20, 2015. (Mark Wilson/Getty Images)

(JTA) — Liberal Jewish financier and philanthropist George Soros was named  Person of the Year by Financial Times, which called him “the standard bearer of liberal democracy and open society.”

The British news outlet also noted that there have been “so many anti-Semitic conspiracy theories targeting Mr. Soros that it is difficult to keep count. Hardly a day goes by without a statement, a tweet or an image depicting him as a master manipulator of global politics.”

The choice by the centrist, free market Financial Times seems aimed, in part, to counter such allegations and focus on what it called “the values he represents,” including openness, media freedom and human rights. “These are the ideas which triumphed in the cold war. Today, they are under siege from all sides, from Vladimir Putin’s Russia to Donald Trump’s America,” the paper writes.

In an interview with Financial Times, Soros takes note of the backlash against him among authoritarian regimes and nationalist populists, particularly in Europe.

“I’m blamed for everything, including being the anti-Christ,” Soros says. “I wish I didn’t have so many enemies, but I take it as an indication that I must be doing something right.”