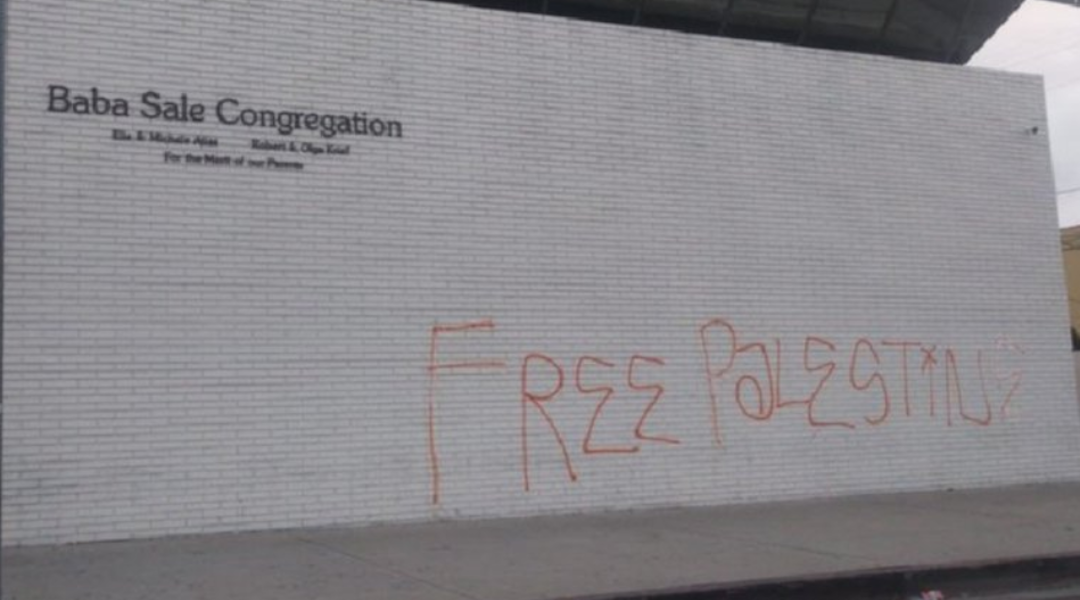 A view of the Baba Sale Congregation after it was vandalized. (ADL/Twitter)
Advertisement

(JTA) — “Free Palestine” was spray-painted on the front of a Los Angeles synagogue.

The vandalism took place at the Baba Sale Congregation, in the Fairfax district of the city, on Wednesday between the time worshippers had entered for services at 5:30 a.m. and when they exited about an hour later, the CBS affiliate in Los Angeles reported.

Video footage from a security camera shows a man in a hoodie spray-painting the building and driving away, the Los Angeles Jewish Journal reported. A board member, Zev Opos, told the newspaper that three female witnesses saw three men in hoodies drawing on the synagogue.

The graffiti was painted over later the same day.

The congregation is Moroccan and Orthodox.

Opos told the Jewish Journal that the graffiti is particularly hurtful in light of the history of Arab nations expelling Sephardic and Mizrahi Jews following the establishment of the State of Israel in 1948.

“We’re a Jewish house of worship that’s located 7,500 miles from the Middle East where this conflict is taking place, and we came under attack solely for being Jewish,” Opos said, “because we as a congregation, we don’t take any political positions and we’ve never made any political statements.”

@LA_ADL is working with law enforcement on this shocking act of vandalism on a synagogue. As our annual audit reflects, anti-Semitic incidents have been on the rise in California. pic.twitter.com/nsBMvzCDgd