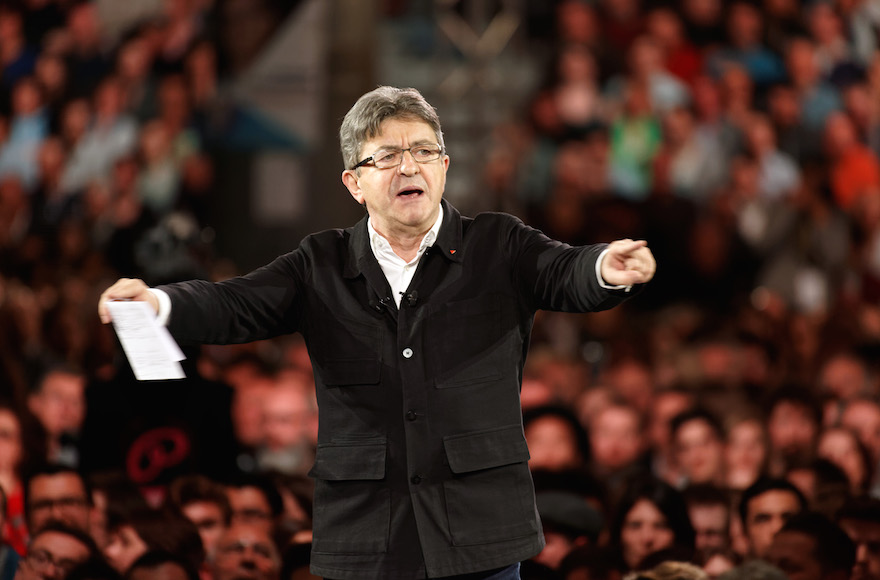 (JTA) — A leader of the French left accused French Jews of inciting violence against him and promoting “violent and aggressive sectarianism.”

Jean-Luc Melenchon, leader of the France Unbowed party, inveighed against the CRIF federation of Jewish communities on Sunday during a televised interview with France Inter.

“Sectarianism’s always been a problem for the republican idea,” said Melenchon. “Take CRIF.  It practices blatant, violent and aggressive sectarianism, namely against me, right? To the point of encouraging people to hit me during a demonstration like the one for Mirelle Knol.”

Mirelle Knol was a Holocaust survivor who was murdered in her Paris apartment last year, allegedly by a Muslim neighbor. CRIF asked Melenchon and the leader of the right-wing National Rally party, Marine Le Pen, not to attend a commemorative march for Knol. Both politicians came to the march anyway, where participants booed them until police escorted them away.

CRIF did not call for violence and none occurred at the event. The group also condemned the booing.

Melenchon went on to call CRIF “bizarre, folkloristic and ridiculous.” Asked whether sectarianism exists also among Muslims, Melenchon said: “No. They have delinquents, same as anywhere, but none claim their law supersedes others.”

Melenchon has been accused of anti-Semitic rhetoric in the past. In 2014, he called French Jews “an aggressive community preaching to the rest of the nation.”

Melenchon won a fifth of the votes in the 2017 presidential election.