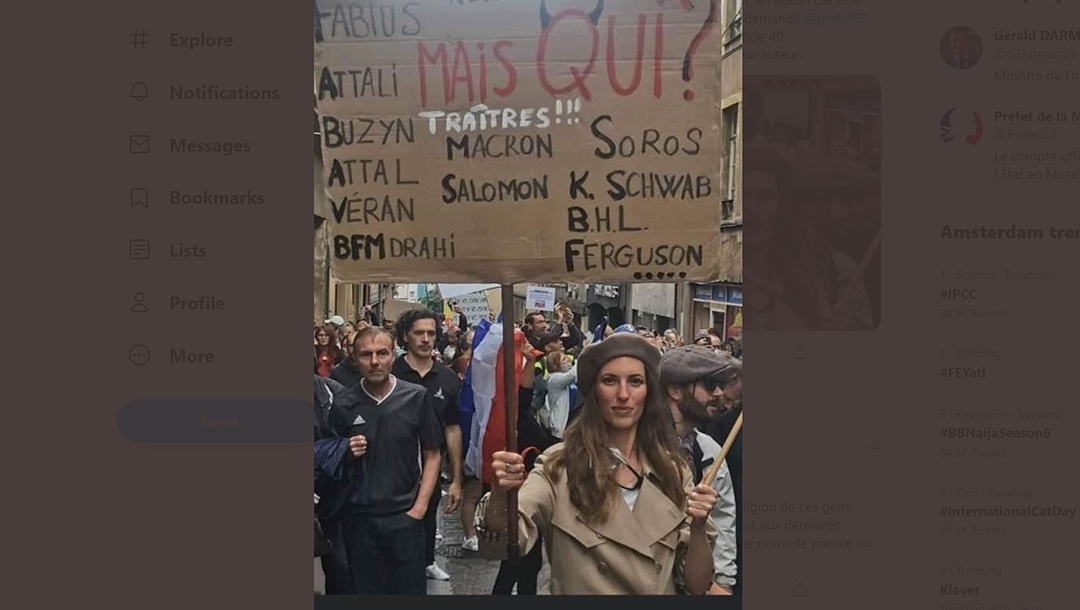 A woman holds up a placard denouncing President Emmanuel Macron and several prominent Jews denounced as traitors at a protest against COVID restrictions in Metz, France on Aug. 7, 2021. (Gérald Darmanin/Twitter)
Advertisement

(JTA) — Police in France detained a woman for carrying a sign widely deemed antisemitic at a demonstration against COVID-19 emergency measures.

Cassandre Fristot, an activist for the far-right National Rally party, held up a brown cardboard poster at the rally Saturday in Metz condemning President Emmanuel Macron and several well-known Jewish people as “traitors.” Fristot, who lost her 2012 bid for a local council on the National Rally ticket, is suspected of inciting hatred of Jews, Le Monde reported Monday.

The poster also featured the question “but who?” with one of the letters decorated with devil’s horns. It listed as traitors several politicians and businesspeople who are Jewish or have Jewish roots, including former Prime Minister Laurent Fabius, former Health Minister Agnès Buzyn, government spokesperson Gabriel Attal, George Soros and philosopher Bernard-Henri Levy.

The rally was protesting the introduction of a COVID vaccine pass to be used at many public spaces as a requisite for admission.
Antisemitic rhetoric at protests concerning the pandemic has been commonplace, but the picture of Fristot, with the French flag in the background, went viral on social media and elicited strong-worded condemnations from France’s top politicians.

“This poster is reprehensible,” Interior Minister Gérald Darmanin wrote on Twitter. “Antisemitism is a criminal offense, not an opinion and such expressions will not remain unpunished.”