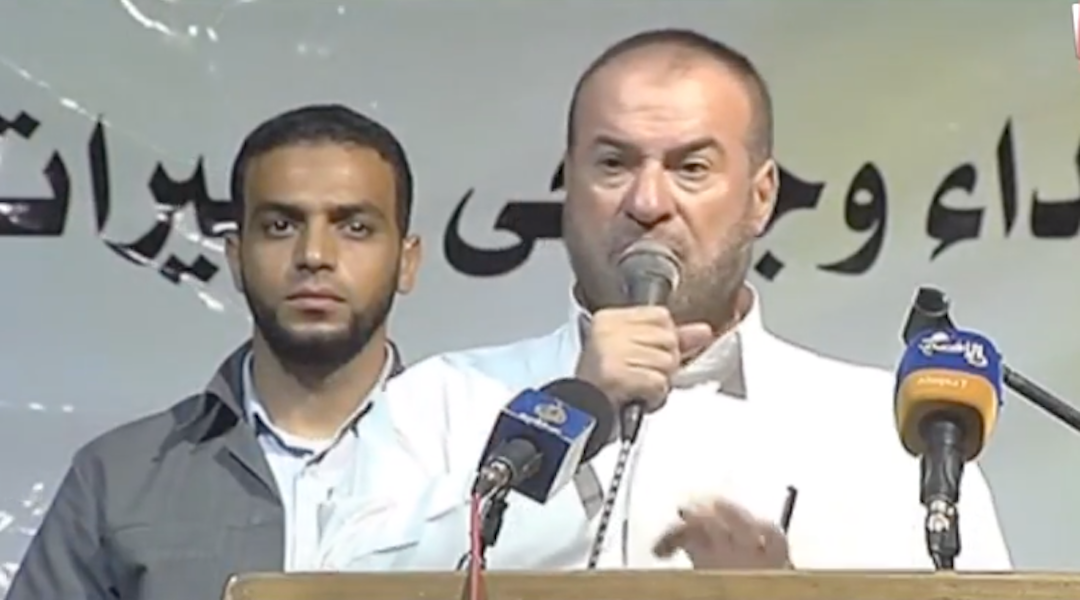 Fathi Hammad, right, was a Hamas cabinet member until 2014. (Screenshot from YouTube)
Advertisement

(JTA) — A senior Hamas official urged Palestinians abroad to kill Jews in Israel and beyond.

“All of you 7 million Palestinians abroad, enough of the warming up. You have Jews everywhere and we must attack every Jew on the globe by way of slaughter and killing, if God permits,” Fathi Hammad, a Hamas Cabinet minister until 2014, said Friday in a speech in Gaza.

A Hamas official in Gaza said Hammad’s views do not represent the official position of Hamas, which is considered a terrorist movement in the European Union and the United States, among other countries.

“These are personal statements that do not represent Hamas. They are no more than emotional comments that he may have said because of the killing of one of our members,” the official, who spoke on condition of anonymity because he was not authorized to speak to the Israeli press, told The Times of Israel. “Our problem is not with the Jews, but rather the occupation and the Zionist movement that is occupying Palestine.”

The Israeli military acknowledged that it killed a Hamas member at the Gaza border by mistake on Thursday, and Hamas threatened in a statement that “Israel will pay for its actions.”

“The just values of the Palestinian cause include love for freedom, justice and equality,” Erekat tweeted Monday. “The repugnant statement of Hamas leader Mr. Fathi Hammad about Jews doesn’t represent any of them.”