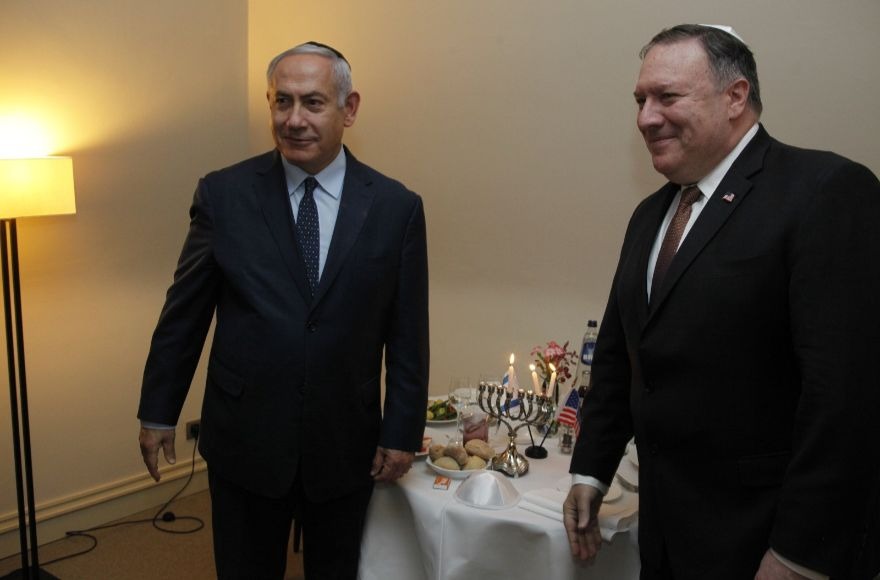 Netanyahu at Monday’s meeting updated Pompeo on Israel’s operation to destroy tunnels built by Hezbollah between Lebanon and Israel. He called the tunnels “a gross violation of Israeli sovereignty and of U.N. Security Resolution #1701,” which ended the 2006 Lebanon War.

Pompeo “emphasized the United States’ commitment to Israel’s security and absolute right to self-defense and to fighting anti-Israeli bias at the United Nations,” State Department spokeswoman Heather Nauert said in a statement. It also “reiterated America’s resolve in confronting the totality of the Iranian regime’s threats through maximum pressure.”

The statement also said that Pompeo reiterated U.S. support for warming ties and increased dialogue between Israel and its neighbors in the Middle East and Africa, including Oman and Chad, and the secretary of state noted the strength of the U.S.-Israel alliance and “our multifaceted cooperation.”

Pompeo was in Brussels for a NATO meeting of foreign ministers. The meeting with Netanyahu was originally scheduled for Wednesday, but had to be moved up so that Pompeo could return to the United States for the funeral of former president George W. Bush.

Speaking about Pompeo, Netanyahu told reporters: “I want to thank you for everything that you’re doing, for your strong statements on the latest violation by Iran on the ballistic missiles. I look forward to discussing with you how we can together curb Iran’s aggression in the region, in Syria, in Iraq, in Lebanon and elsewhere and to continue our efforts to achieve peace and security for everyone.”

Prior to the meeting, the prime minister and secretary of state lit candles for the second night of Hanukkah.

Netanyahu left for the meeting on Monday, hours after it was announced, and returned early Tuesday morning.