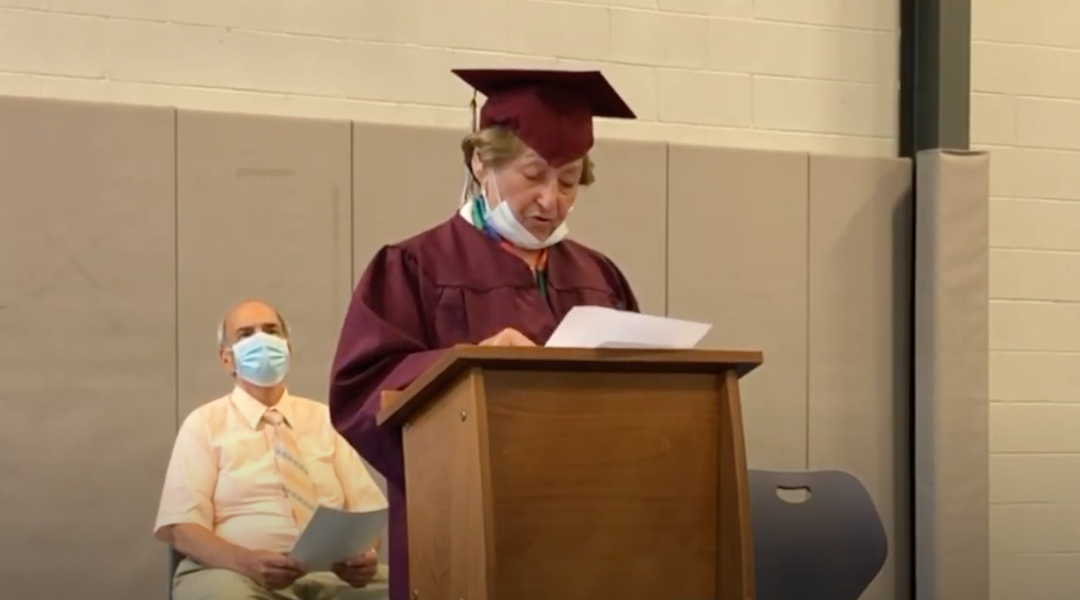 Miriam Schreiber speaks after being presented with an honorary diploma at the New England Jewish Academy in Hartford, Conn., Aug. 16, 2020. (Screen shot from YouTube)
Advertisement

(JTA) — An 88-year-old Holocaust survivor from Poland who says that never having a formal education has been “a profound regret” was awarded a high school diploma.

Miriam Schreiber of Hartford, Connecticut, was presented with an honorary diploma on Aug. 16 at an appropriately socially distanced ceremony at the New England Jewish Academy in Hartford, The Washington Post reported. She accepted the diploma in a cap and gown.

Representatives of the senior class had met with Schreiber, a Warsaw native, at the beginning of the school year and heard her life story. The entire class voted to award her the diploma.

The students had planned to give her the diploma at their graduation ceremony, but when the graduation was switched to a  virtual ceremony due to the coronavirus, they planned the special ceremony.

“Somehow the right people came together at the right time,” Schreiber said at the ceremony. “As a result, now I am offered an honorary degree to recognize that my life, learning and experiences are worthy of that honor.”

Schreiber is the mother of two sons, four grandchildren and three great-grandchildren. Her husband died nine years ago.

Schreiber and her family hid in villages and forests in Poland for several months beginning in 1939 when she was 7 years old. She then spent nearly six years in a slave labor camp in Siberia. She watched family members freeze and starve to death, according to the report.

Liberated at 14, Schreiber was sent to a displaced persons camp in Germany. She married her husband when she was 15 and had her first child the following year. The family immigrated to the United States in 1960.

She has learned six languages and is an avid reader.

“When I finally got the diploma, I kissed it,” Schreiber told the Post. “I just couldn’t believe it was mine.”