Holocaust survivors mark Hanukkah at events around the world 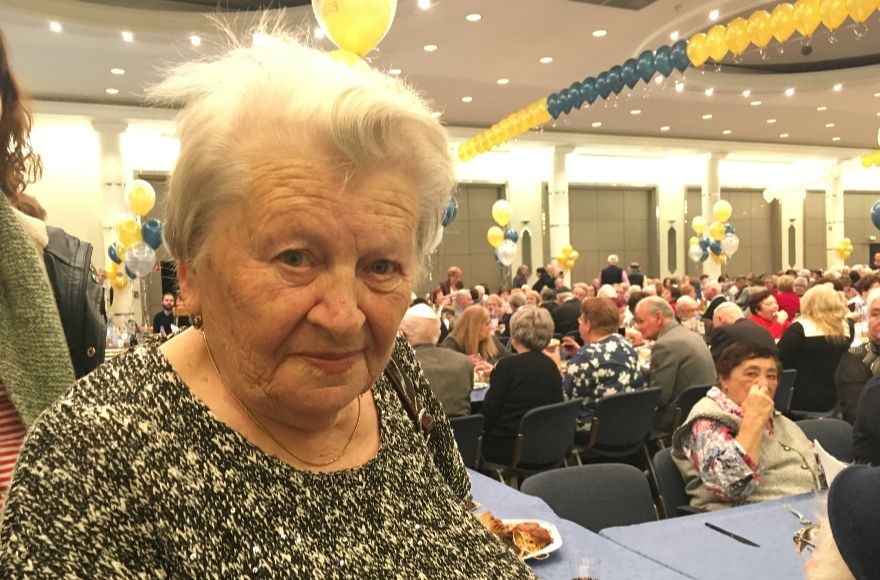 BERLIN (JTA) – In a ballroom decorated with a giant Hanukkah menorah made of golden balloons, some 400 Holocaust survivors and their families gathered for the second annual Holocaust Survivors’ Night.

The event, sponsored by the Conference on Jewish Material Claims Against Germany, was both festive and somber. Speakers repeated concerns about recent polls showing that knowledge about the Holocaust is waning.

“We mustn’t forget to tell about what happened,” Roman Haller, director of the Claims Conference Successor Organization in Germany, said in remarks to the gathering, which was held at the Jewish community center in Berlin. “But we are not just victims.”

Haller was born in 1944 while his parents were in hiding in Ukraine.

The Claims Conference also hosted gatherings in Jerusalem, Moscow and the New York metro area on the third night of Hanukkah. The organization estimates that some 400,000 survivors are living around the world today – including those who fled to the east of the former Soviet Union.

In Berlin, speakers included government officials and Jewish leaders along with Claims Conference representatives. One was Charlotte Knobloch, head of the Jewish community of Munich and Upper Bavaria, who survived the Holocaust in hiding in Bavaria.

Sitting at long tables decorated with balloons, participants helped themselves to a meal of rice pilaf with chicken and beef and beet salad, washing it down with Manischewitz wine. At least one participant brought his own vodka in a hip flask. Russian was heard everywhere.

Lighting one of the Hanukkah candles together with Berlin community Rabbi Jonah Sievers was Assia Gorban, 85, a Ukraine native who escaped from a concentration camp there with her mother. They were liberated by the Red Army in March 1944.

In 1992, she moved from Moscow to Berlin. Today she is a great-grandmother and “filled with joy to see the Hanukkah menorahs” all over her adopted city.

Since the Claims Conference initiated negotiations in 1952, Germany has paid more than $80 billion in indemnification to individuals for suffering and losses resulting from the Nazi persecution.

Next year, the organization will distribute some $350 million in compensation to more than 60,000 survivors in 83 countries, plus $550 million in grants to more than 200 social service agencies that help the aged.