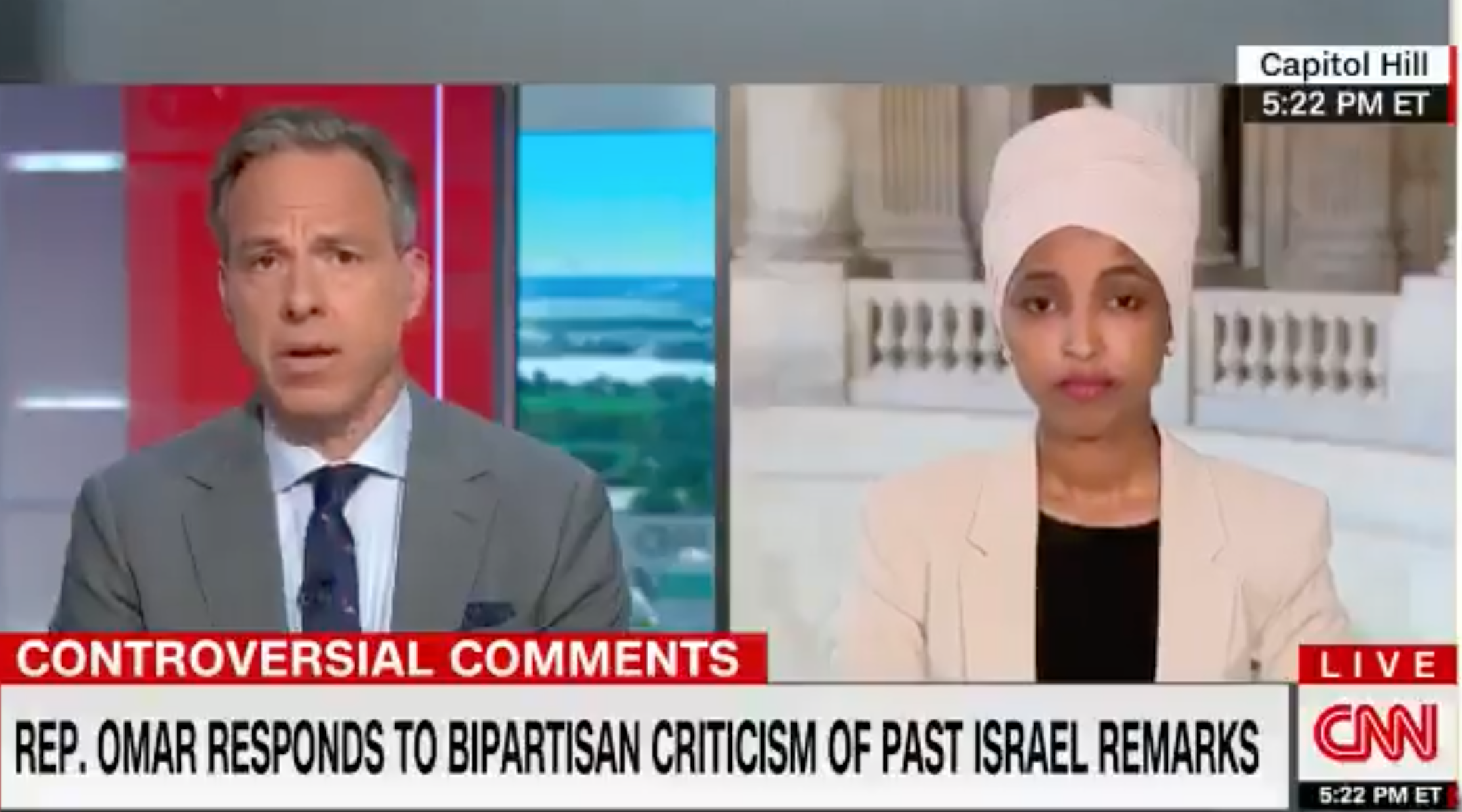 (JTA) — Rep. Ilhan Omar has sparked a fresh round of criticism from some in the Jewish community by saying in a CNN interview that her Jewish Democratic colleagues who call her antisemitic “haven’t been partners in justice.”

Jewish anchor Jake Tapper asked Omar on air Tuesday if she understood “why some of your fellow House Democrats, especially Jews,” have found some of her past comments antisemitic. Tapper cited a 2012 tweet in which the Minnesota lawmaker said Israel had “hypnotized the world” and her 2019 comment that AIPAC, the prominent Israel lobby, is “all about the Benjamins.”

In response, Omar said she has welcomed opportunities to engage with her critics, but added: “I think it’s important for these members to realize that they haven’t been partners in justice, they haven’t been equally engaging in seeking justice around the world.”

Omar has been among the most vocal Israel critics in Congress and supports conditioning U.S. aid money to the country — an option firmly opposed by many of her Democratic House colleagues.  She is also one of only a few Democrats in Congress to support the Boycott, Divestment and Sanctions movement against Israel. Her 2019 AIPAC comment and subsequent statements about Israel strained relations with Jews in her state’s district and across the U.S.

Conservative Jewish groups such as the Republican Jewish Coalition quickly criticized her comment from Tuesday.

Will @USJewishDems join us in calling out @Ilhan Omar for saying Jewish members of Congress aren't "partners in justice?" Or, is the JDCA and @HalieSoifer going to show us all, once again, that they're frauds?

Avi Mayer, managing director of global communications for the nonpartisan American Jewish Committee, said Omar’s words “draw on classic antisemitic themes about Jewish clannishness, the notion that Jews only look out for themselves.”

Rep. David Cicilline of Rhode Island said on Twitter that “right wingers in Washington are once again claiming Rep. @Ilhan Omar said something she didn’t say, and trying to create a controversy where there is none.”

“It’s pathetic that they are (once again) demonizing a young woman of color to score political points,” he added.

Omar retweeted Cicilline’s comments, adding: “It’s their mission to turn and twist everything I say until I am completely silenced.”

On Wednesday morning, Omar also posted a long thread of tweets about the history of Black-Jewish cooperation, beginning with the statement that “many of my colleagues — both Jewish and non-Jewish — deeply share” a commitment to fighting injustice.

“I also know that the Black community and the Jewish community have historically stood side-by-side in the fight against injustice and throughout our history we have faced efforts to divide us based on our differences,” she wrote in one tweet.

The thread drew praise from more centrist Democratic Jews, including Hailie Sofer, CEO of the Jewish Democratic Council of America, and Rep. Dean Phillips, who also hails from Minnesota.

“On behalf of generations of Jewish community members in Minnesota and throughout the country who’ve stood hand-to-hand with our brothers and sisters of color in the fight against discrimination in all its forms, we thank you,” Phillips wrote.