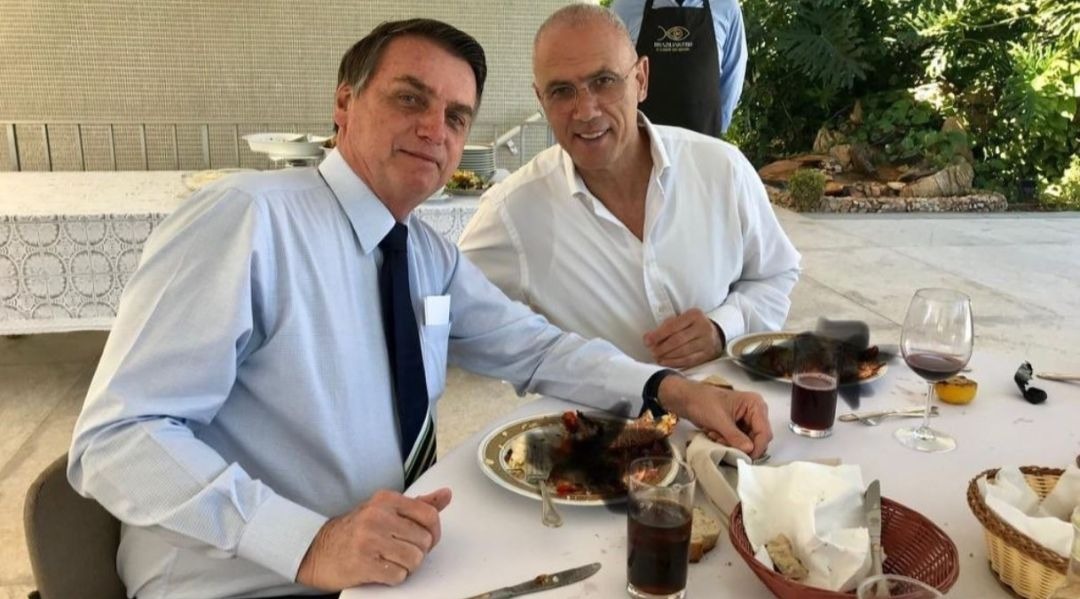 Brazil's president Jair Bolsonaro has what appears to be a lobster lunch with Israeli ambassador Yossi Shelley, prior to the Copa America final match in Rio, where Brazil beat Peru 3-1,on July 7, 2019. (Twitter)
Advertisement

RIO DE JANEIRO (JTA) – Israel’s embassy in Brazil shared a photo of its ambassador eating lunch with Brazilian President Jair Bolsonaro, but not before blurring out the lobster dishes the two appeared to be enjoying.

The camouflaged picture made headlines in Brazil, with local media noting that the crustacean is an expensive delicacy and international media noting it is decidedly non-kosher.

Black smudges blur what appear to be lobsters from a picture posted on social media on Sunday of Ambassador Yossi Shelley having lunch with  Bolsonaro.

Shelley and Bolsonaro have been close friends for some time. The picture was taken at a seafood restaurant in Brasília before they went to watch the Copa America final soccer match in Rio, where Brazil beat Peru 3-1, winning the championship.

Later, the ambassador posted several photos at the Macarana stadium expressing his effusive support for the Brazilian team.

“Difficult to describe the feeling of being present this night of great emotion for the Brazilian people. I already feel heartfelt as part of this beautiful country,” Shelley posted adding both the Israeli and the Brazilian flags united by a heart.

In May, Bolsonaro awarded Shelley the National Order of the Southern Cross, Brazil’s highest national honor for high-ranking guests.

Shelley was the very first diplomat welcomed by Bolsonaro, less than 24 hours after his electoral victory last year in a clear signal of close ties between Brasilia and Jerusalem. During the previous 15 years Brazil’s former far-left governments clashed with Israel’s government.