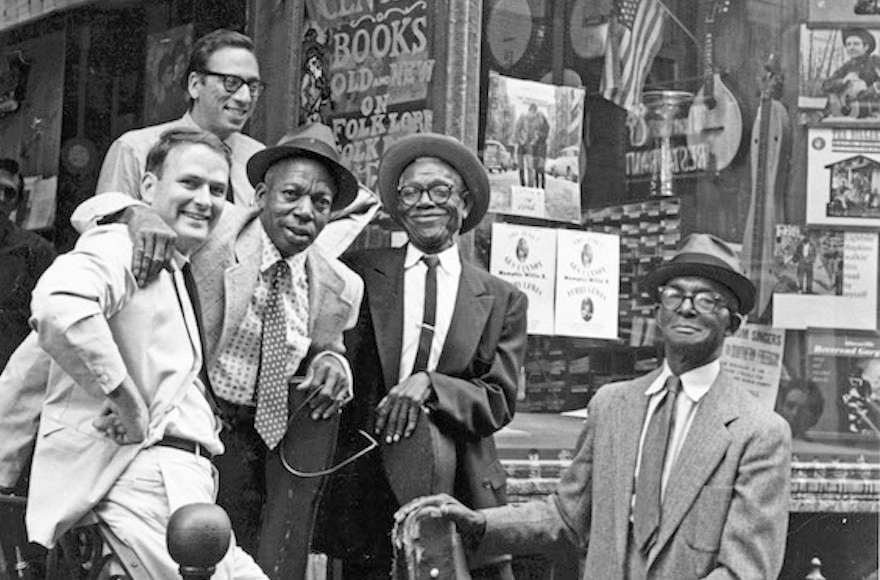 Izzy Young (at back) poses at his Folklore Center in Greenwich Village with, from left, music historian Sam Charters and blues musicians Memphis Willie B., Furry Lewis, and Gus Cannon. (Photo by Ann Charters)
Advertisement

Young died Monday at his home in Stockholm. He was 90.

Israel Young was born in 1928 to Polish immigrants on the Lower East Side. His mother inspired him with Yiddish songs and he worked at his father’s bakery in Brooklyn.

When Izzy opened the Folklore Center in New York’s Greenwich Village in 1957, he wanted it to be a combination of all his passions. It was a music store, a bookstore, an archive, a place where artists could sit for hours listening to old recordings, writing or schmoozing. Young became a mentor to many of the most renowned beat poets and folk musicians of that era.

“On MacDougal Street I saw a cubby hole,
I went in to get out of the cold,
Found out after I’d entered
The place was called the Folklore Center —
Owned by Israel Young —
He’s always in back —
Of the center.”

Young closed the Greenwich Village shop in 1973 and moved to Stockholm, where he started a similar enterprise, the Folklore Centrum.

In 2016, Young shipped 20 boxes to the American Folklife Center in Washington, D.C. Inside were journals, manuscripts, photographs and recordings of some of America’s greatest musicians, including Pete Seeger and Dylan.