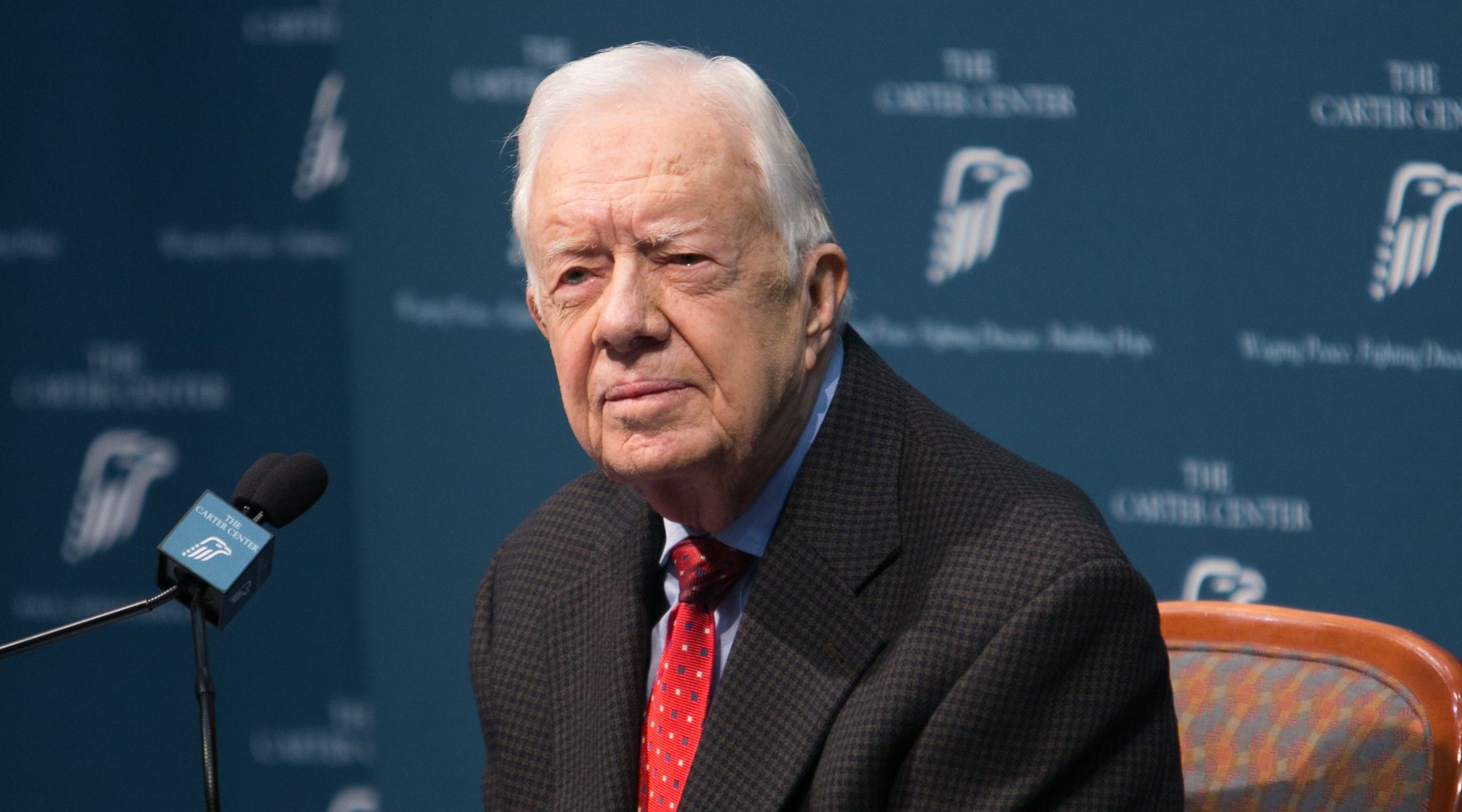 (JTA) — J Street, the liberal pro-Israel group, is presenting Jimmy Carter with a peacemaker award at its conference, recognizing the former president, who has frequently tangled with the mainstream pro-Israel community, for brokering the 1979 Egypt-Israel peace.

“By helping to broker the incredible Camp David Accords between Israel and Egypt, President Carter demonstrated that determined American diplomacy can end decades of conflict and bring together even the most determined foes,” J Street President Jeremy Ben-Ami said Monday in a release sent to the Jewish Telegraphic Agency.

J Street’s Tzedek v’Shalom award goes to “distinguished individuals who have made critical contributions in their lives to the cause of peace for Israelis, Palestinians and the wider Middle East,” the release said.

The award is in line with the longstanding claim by J Street, itself a group that forcefully criticizes Israeli policies and pro-Israel orthodoxies, that doing good work on Israel’s behalf sometimes requires tough love.

“With visionary moral clarity, he has emphasized that the well-being of the Israeli and Palestinian peoples are inextricably intertwined — and has never given up the hope that the occupation and their conflict can and must be brought to a just and peaceful end,” Ben-Ami said.

Carter, despite brokering Camp David, Israel’s longest-lasting and most solid peace agreement, had fraught relations with Israel and the pro-Israel community during his presidency. He sought to leverage arms sales to Israel to extract concessions, the third rail for pro-Israel groups, and he made it clear that he saw Menachem Begin, then the prime minister, as more recalcitrant than Anwar Sadat, then the Egyptian president.

The relationship between Carter and U.S. Jewish leaders, if anything, worsened in Carter’s post-presidency. Carter became more sharply critical of Israel, and in 2006 he published a book titled “Palestine: Peace not Apartheid,” stirring outrage in Israel and among its American friends for likening Israeli practices to the racist South African apartheid regime.

Democrats kept Carter from speaking at their 2008 convention, which nominated Barack Obama for president, in part because the book had opened wounds between Jewish Democrats and the ex-president. He spoke in 2012, although mainstream Jewish groups were none too happy about it.

Carter, more broadly, has enjoyed more popularity post-presidency than he did during his one term, living modestly, promoting peace and working for charitable causes.

In 2009, Carter contacted JTA to apologize for using the word “apartheid” in the title of his book, saying it was meant to describe a possible outcome of Israeli policies and not the current reality. He used the Hebrew term “al het,” for seeking repentance.

The April 18-19 J Street conference, which features speakers identified with the Democratic Party’s progressive wing, including Vermont Sen. Bernie Sanders, will be virtual in line with coronavirus pandemic restrictions. The 96-year-old Carter, who is frail, will not accept the award. Paige Alexander, the CEO of The Carter Center, an NGO founded by the ex-president to promote peace, will accept on his behalf.