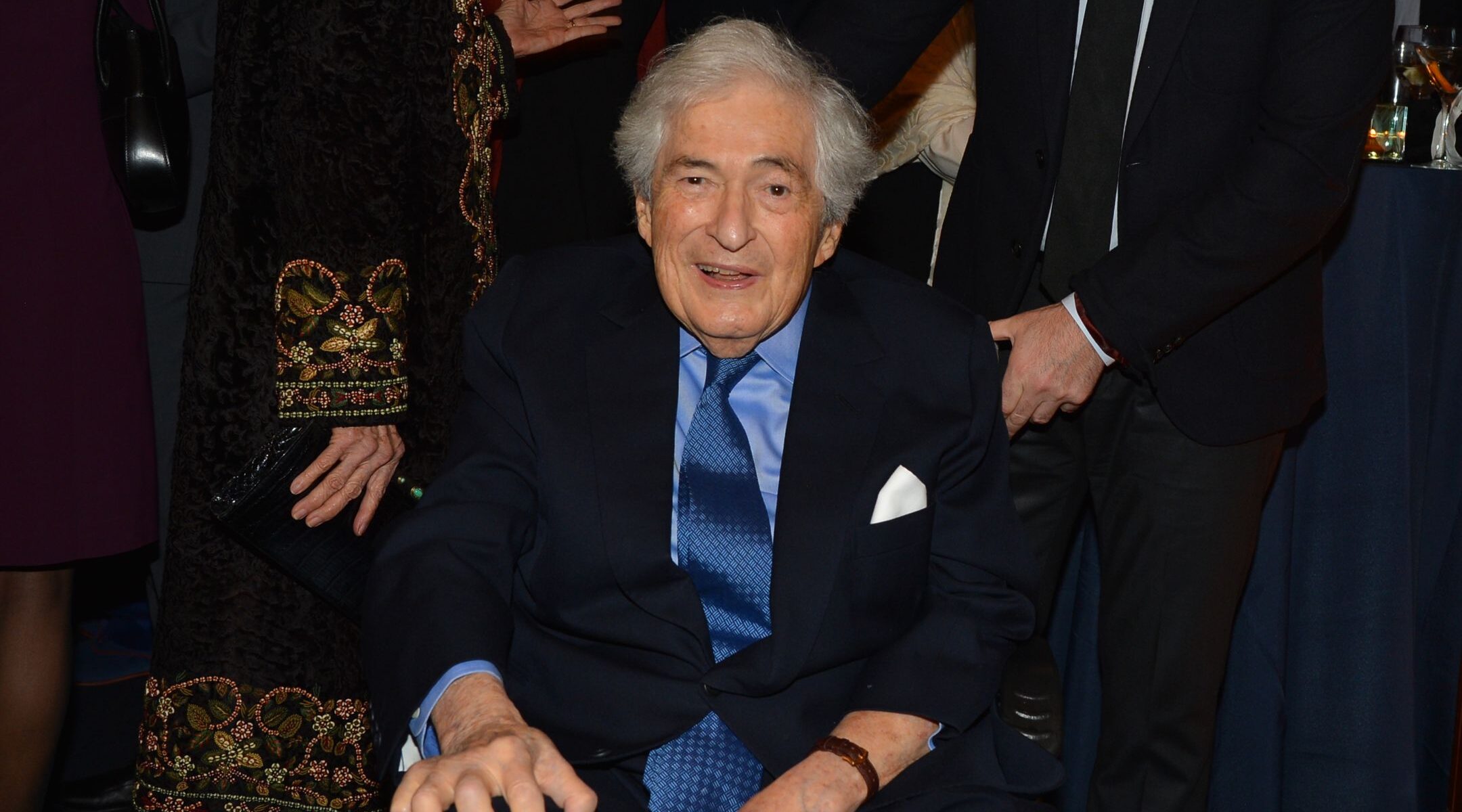 (JTA) — James Wolfensohn, the World Bank president and philanthropist who helped shepherd Israel’s exit from the Gaza Strip, has died at 86.

Wolfensohn died Wednesday at his Manhattan home, media said, of pneumonia. His wife of 59 years, Elaine, died in August.

Wolfensohn, who was born and raised in Australia, was an investment banker whose philanthropic endeavors had included turning around the fortunes of Carnegie Hall and the Kennedy Center when in the 1990s he began lobbying to be president of the World Bank.

President Bill Clinton named him to the post in 1995 — the U.S. president has naming prerogatives — and his ten-year term was marked by his focus on partnership, rather than patronage, with the developing world. Instead of a disciplinarian, he made the institution a counselor and aide to developing economies. He ended the bank’s practice of tolerating corruption.

“We must rebalance our world to give everyone the chance for life that is secure,” Wolfensohn said in a 2003 speech to the bank and its sister lending institution, the International Monetary Fund, “with a right to expression, equal rights for women, rights for the disabled and disadvantaged, the right to a clean environment, the right to learn, the right to development.”

Always on the lookout to do good, his next venture was not as successful. President George W. Bush named Wolfensohn as the envoy to the Gaza Strip of the Quartet, the grouping of the United States, Russia, the United Nations, and the European Union guiding the Middle East peace process.

Wolfensohn shepherded Israel’s exit from Gaza in 2005, a process rife with miscalucalations that led to the victory of Hamas in 2007 elections and permanent tensions on the border.

Symbolic of the enterprise’s failure was the fate of greenhouses tended by Israeli settlers. When Wolfensohn learned the settlers planned to smash the greenhouses on their way out, he raised $14 million, including $500,000 of his own money, to salvage them for use by Palestinians.

Much to the consternation of Palestinian leaders, whose police were understaffed, underpaid and underequipped, local Palestinians looted the greenhouses. What truly doomed the enterprise, however, according to Wolfensohn, were Israeli restrictions on the export of produce from Gaza.

Wolfensohn was his entire life also devoted to Jewish giving. The family foundation he set up, administered by his children, gave to a broad array of Jewish causes across denominations. At the time of a JTA profile of Wolfensohn in 2005, the foundation’s beneficiaries included an Orthodox environmental advocacy group and a Reconstructionist gender studies center. He and his wife were active in the Conservative movement.

In 2006, he seeded money for perfect reproductions of the famed Sarajevo Haggadah that would be sold in part to help sustain the tiny Bosnian Jewish community.

His activism stemmed from his youth; his parents helped bring to Australia Jewish refugees from Europe. He was radicalized, he said, by the poverty he encountered in Africa and Asia as an air conditioning salesman. He eventually joined investment banks in London and then in New York. “The inequity was so striking that I could hardly absorb what was in front of me,” The Washington Post quoted him as saying in his 2010 autobiography, “A Global Life.”

Wolfensohn, notably self-deprecating, described himself as driven more than naturally intelligent. He said he learned from his mistakes. He made the Australian Olympics fencing team in time for the 1956 Olympics in Melbourne. He had won two matches and was on his way to winning a third, when his opponent, during a break, distracted him with an offer: He would set up Wolfensohn with an Israeli swimmer.

“Fencing is a little like chess,” Wolfensohn wrote in his autobiography. “You must project a few moves ahead and outthink your opponent.”