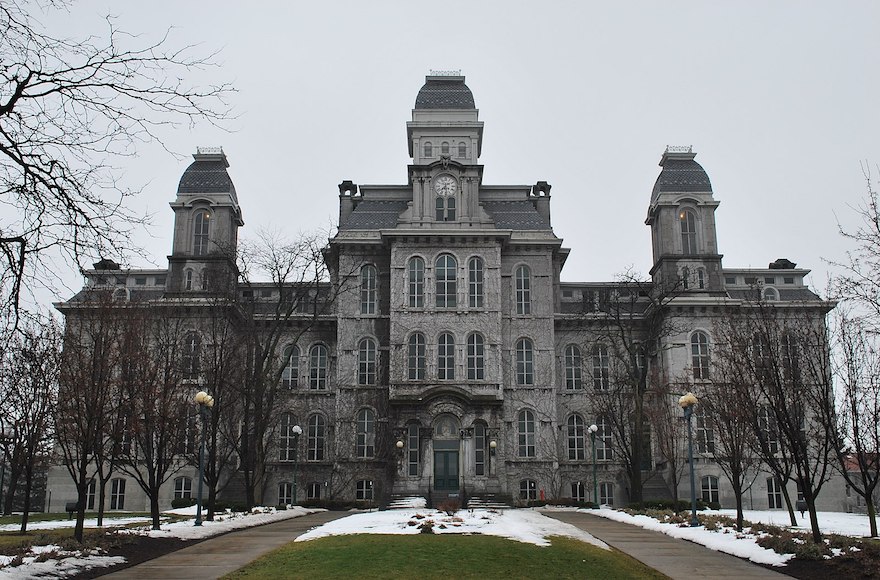 (JTA) — A professor at Syracuse University was threatened by an anonymous email containing anti-Semitic language and Holocaust references.

The email sent on Tuesday morning to Genevieve García de Müeller, a professor of writing, rhetoric and composition, the campus student newspaper, The Daily Orange, reported.

The subject line of the email was “JEW.” It told her to “get in the oven where you belong” and ended with an anti-Semitic slur, according to the newspaper, which did not disclose the slur.

Mueller is Jewish and Mexican.

“Immediately, I thought of the safety of my family,” Müeller told the newspaper. “I don’t know who would’ve sent it. I don’t know who knows I’m Jewish. It’s not something I talk about in class necessarily, but it was very personal to me.”

She said she tweeted a screenshot of the email to the Syracuse Police Department.

A day later, a white supremacist manifesto was air-dropped to students’ cellphones at Syracuse’s Bird Library. Syracuse University officials later called reports of the air-drop “unsubstantiated rumors.” “So far, no one has been able to produce a device that received that document despite pleas from investigators to come forward to help find those responsible,” the university said in a statement.

It is the 16 racist or bias-related incident reported on or near the campus since Nov. 7, according to The Daily Orange. Most of the incidents are against black and Asian people

A week ago, the university cancelled all fraternity activities for the rest of this semester after racist activities were reported.