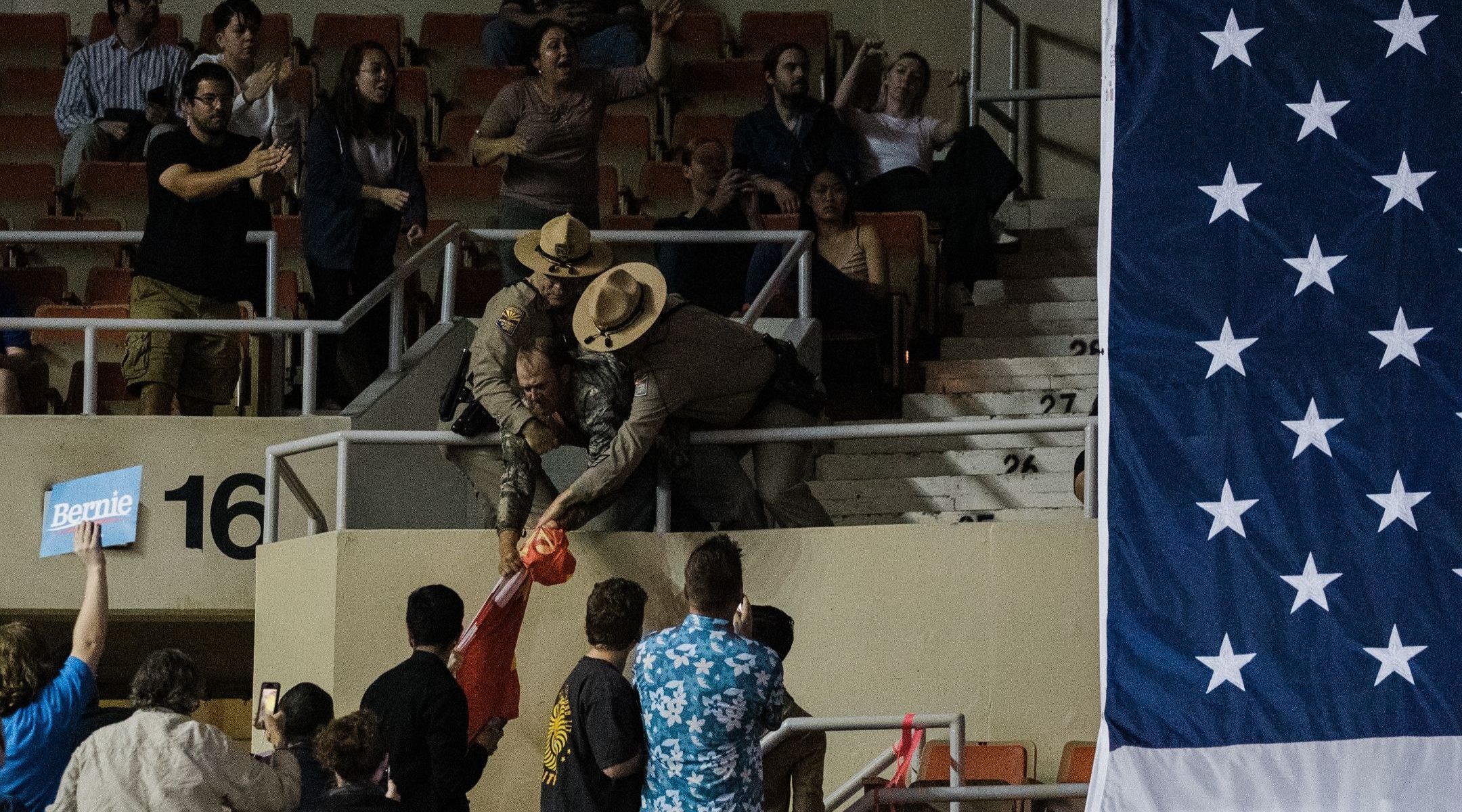 A protester is restrained by police officers after displaying a Trump flag at a campaign rally in Phoenix for Democratic presidential candidate Bernie Sanders, March 5, 2020. There were several disruptions during the rally, including a white nationalist brandishing a Nazi flag. (Caitlin O'Hara/Getty Images)
Advertisement

(JTA) — A protester later identified as a known white supremacist unfurled a Nazi flag at a Bernie Sanders rally in Phoenix.

The incident caught on social media shows a man in the higher seats of the Arizona Veterans Memorial Coliseum unfurling the swastika flag on Thursday. Sanders, the Vermont senator vying with former vice president Joe Biden for the Democratic presidential nomination, is Jewish.

The man was subdued and taken out. Imraan Siddiqi, a staffer with the Arizona chapter of the Council on American-Islamic relations, posted  a photo on Twitter of someone standing on the flag and tagged “snatched from a Nazi.”

“Whoever it was, I think they’re a little outnumbered tonight,” The Washington Post quoted Sanders as saying.

Sanders on Friday said, speaking “as a Jewish American” and “as someone whose family was wiped out by Hitler,” “it is horrific, it is beyond disgusting that in the United States of America people who would show the emblem of Hitler and of Nazism.”

Biden also took to Twitter to condemn the incident. “I don’t care who you’re supporting, attacks like this against a man who could be the first Jewish President are disgusting and beyond the pale,” he said.

A reporter for ABC 15 Arizona posted video on Twitter of what appeared to be the protester sauntering out of the arena shouting a racial epithet.

The Anti-Defamation League identified the white supremacist as Robert Sterkeson of Glendale, Arizona, who on multiple occasions has posted video of himself harrassing Muslim and Jewish targets.

On Oct. 27, 2018, the day a white supremacist murdered 11 worshippers at the Tree of Life synagogue complex in Pittsburgh, Sterkeson unfurled a Nazi flag at a Jewish National Fund conference in the Phoenix area shouting anti-Semitic epithets while someone filmed him.

“Flying the swastika at Jewish National Fund conference on the same day as the synagogue shooting! #RobertBowersDidNothingWrong,” Sterkeson said at the time on social media.