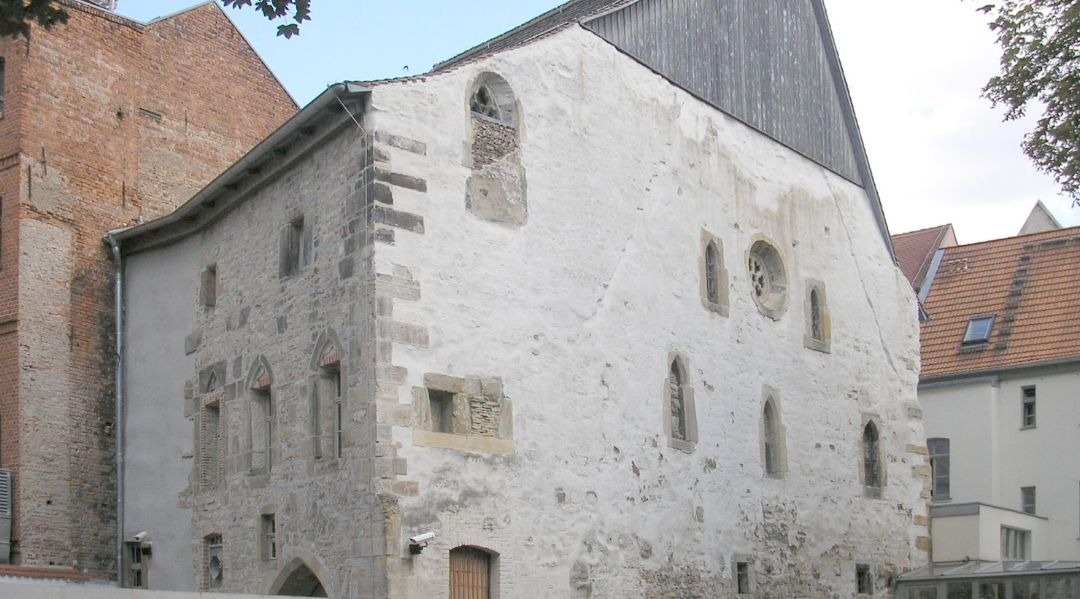 The Old Synagogue of Erfurt, located in the German state of Thuringia. The state will submit an application to UNESCO to name the medieval synagogue a WOrld Heritage Site. (Michael Sander/Wikimedia Commons)
Advertisement

BERLIN (JTA) — The Jewish Community of Thuringia in central Germany will receive a new Torah scroll from Christian groups.

The gift comes a year ahead of the launch of “Nine Centuries of Jewish life in Thuringia.”

Reinhard Schramm, head of the Jewish organization that represents some 700 members in this former East German state, called the gift from the Protestant Church of Central Germany and the Catholic Diocese of Erfurt an “important symbol of solidarity and support of our religious life.”

Schramm called their support “all the more urgent in view of the events in Halle,” a city in the state of Saxony-Anhalt, where an armed
neo-Nazi  attempted to storm the local synagogue on Yom Kippur. The gunman, who shot to death two people outside of the synagogue, was apprehended.

Anti-Semitism in Germany today is a reminder that many citizens do not know or appreciate how Jews have enriched life here, the Christian groups said in a statement announcing their gift. In May, the groups joined with the Jewish community to propose a yearlong celebration of Thuringia’s 900-year Jewish heritage.

The theme year, approved by the Thuringia legislature, will begin in October 2020 and will focus on Jewish life in cities and rural areas, from the Middle Ages to today.

The state also will submit an application for a UNESCO World Heritage Site for the Old Synagogue in Erfurt, one of Europe’s best preserved medieval synagogues. It has housed a museum of local Jewish history since 2009.