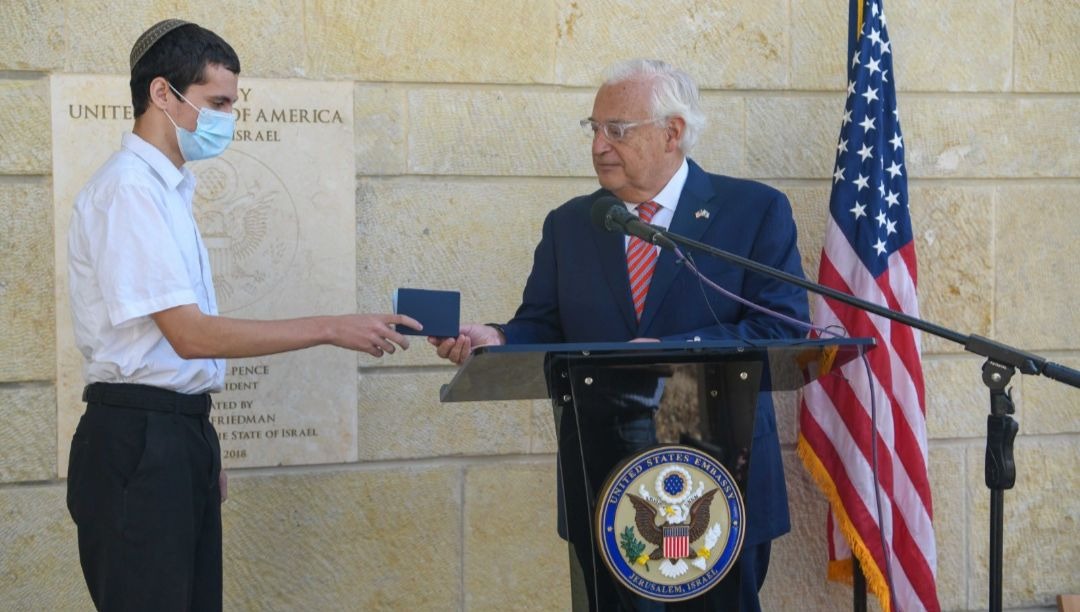 Menachem Zivotofsky, left, receives a US passport from Ambassador David Friedman, right, at the US embassy in Jerusalem on Oct. 30, 2020. (David Friedman's Twitter feed)
Advertisement

(JTA) — The boy whose name came to denote a Supreme Court decision codifying executive control of foreign policy finally got his wish: a passport listing his birthplace as “Jerusalem, Israel.”

In a tweet, Friedman said Zivotofsky was the “very first” American to get a passport with the Jerusalem listing, which is appropriate: His parents’ appeals led Congress in 2002 to mandate the listing should it be requested by Americans who were born in the city.

The George W. Bush administration immediately rejected the law, saying such decisions were up to the executive branch, and the Obama administration followed suit. Zivotofsky’s appeals led to two Supreme Court decisions, both named for the plaintiff and the secretaries of state at the time: Zivotofsky v. Clinton in 2011, which determined that lower courts could hear the case, and Zivotofsky v. Kerry in 2015, which upheld the State Department’s denial of Zivotofsky’s request and determined that the executive branch was paramount in determining foreign policy.

That ruling remains the law of the land, but the Trump administration earlier this week reversed the Jerusalem policy.

The Jerusalem Post quoted Zivotofsky as saying he was “honored” to receive the passport.

“I want to thank my parents who started this process, long before I understood anything,” he said.