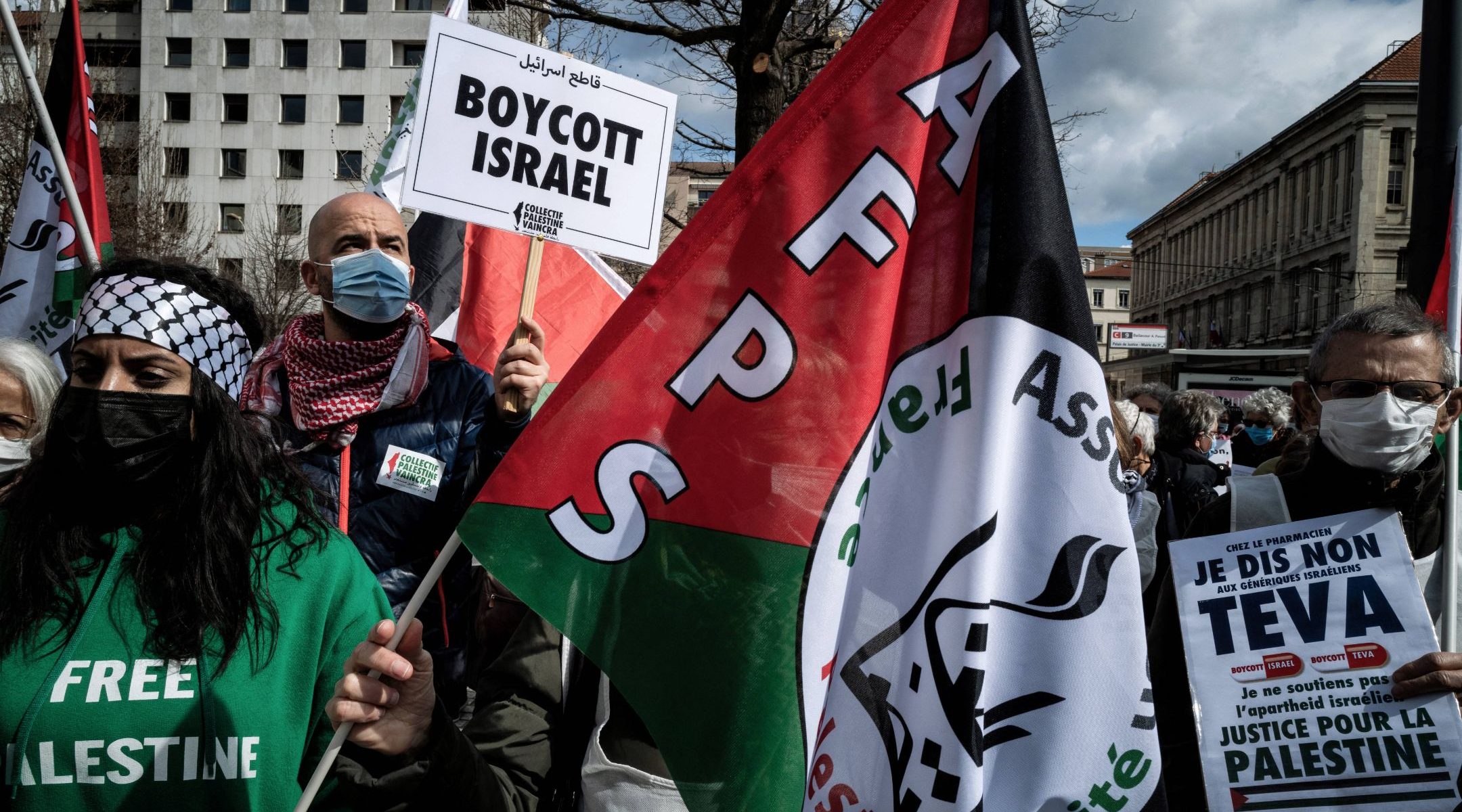 Members of pro-Palestinian associations wave the Palestinian flag at a demonstration in Lyon, France, before the trial of political activist Olivia Zemor for her call to boycott the Israeli pharmaceutical company Teva, March 16, 2021. (Jeff Pachoud/AFP via Getty Images)
Advertisement

(JTA) — A group of over 200 scholars has released a definition of anti-Semitism that explicitly excludes efforts to boycott Israel — the latest pushback against a campaign by a number of establishment Jewish groups to label as anti-Semitic double standards applied to Israel.

The Jerusalem Declaration on Anti-Semitism released Thursday comes just over a week after a separate statement by a liberal group of Jewish scholars said that double standards applied to Israel were not necessarily anti-Semitic.

The Jerusalem Declaration goes further than the earlier declaration by the Nexus Task Force in explicitly saying that the movement to boycott Israel is not in and of itself anti-Semitic.

“Boycott, divestment, and sanctions are commonplace, non-violent forms of political protest against states,” according to the Jerusalem Declaration, which was signed by scholars in the fields of anti-Semitism, the Holocaust, Jewish thought, Israel and other disciplines. “In the Israeli case, they are not, in and of themselves, anti-Semitic.”

Both statements seek to push back a bid by a number of mainstream Jewish groups to have state and national governments adopt the 2016 definition crafted by the International Holocaust Remembrance Alliance. The most controversial component of the IHRA definition defines as anti-Semitic “Applying double standards by requiring of it a behavior not expected or demanded of any other democratic nation.”

The Jerusalem Declaration, so named because it is the initiative of a group of scholars who came together in 2020 under the auspices of the Van Leer Jerusalem Institute, makes clear that it was spurred in part by objections to the IHRA definition.

“Because the IHRA Definition is unclear in key respects and widely open to different interpretations, it has caused confusion and generated controversy, hence weakening the fight against antisemitism,” the declaration says.

Among the signatories to the Jerusalem Declaration are well-known critics of current Israeli policies, including Ian Lustick of the University of Pennsylvania, and the writer Peter Beinart. One signatory, Richard Falk, a former U.N. rapporteur on Palestinian rights, has earned opprobrium for likening Israel to Nazi Germany and for amplifying baseless conspiracy theories about the Sept. 11, 2001 terrorist attacks on the United States.

Other signatories are in the mainstream of modern Jewish scholarship, including Susannah Heschel, the chairwoman of the Jewish studies program at Dartmouth; A.B. Yehoshua, the Israeli novelist; and Dov Waxman, the chairman of Israel studies at UCLA.

Among the declaration’s lead drafters are anti-Semitism scholars in the United States, Israel, Germany and Britain.