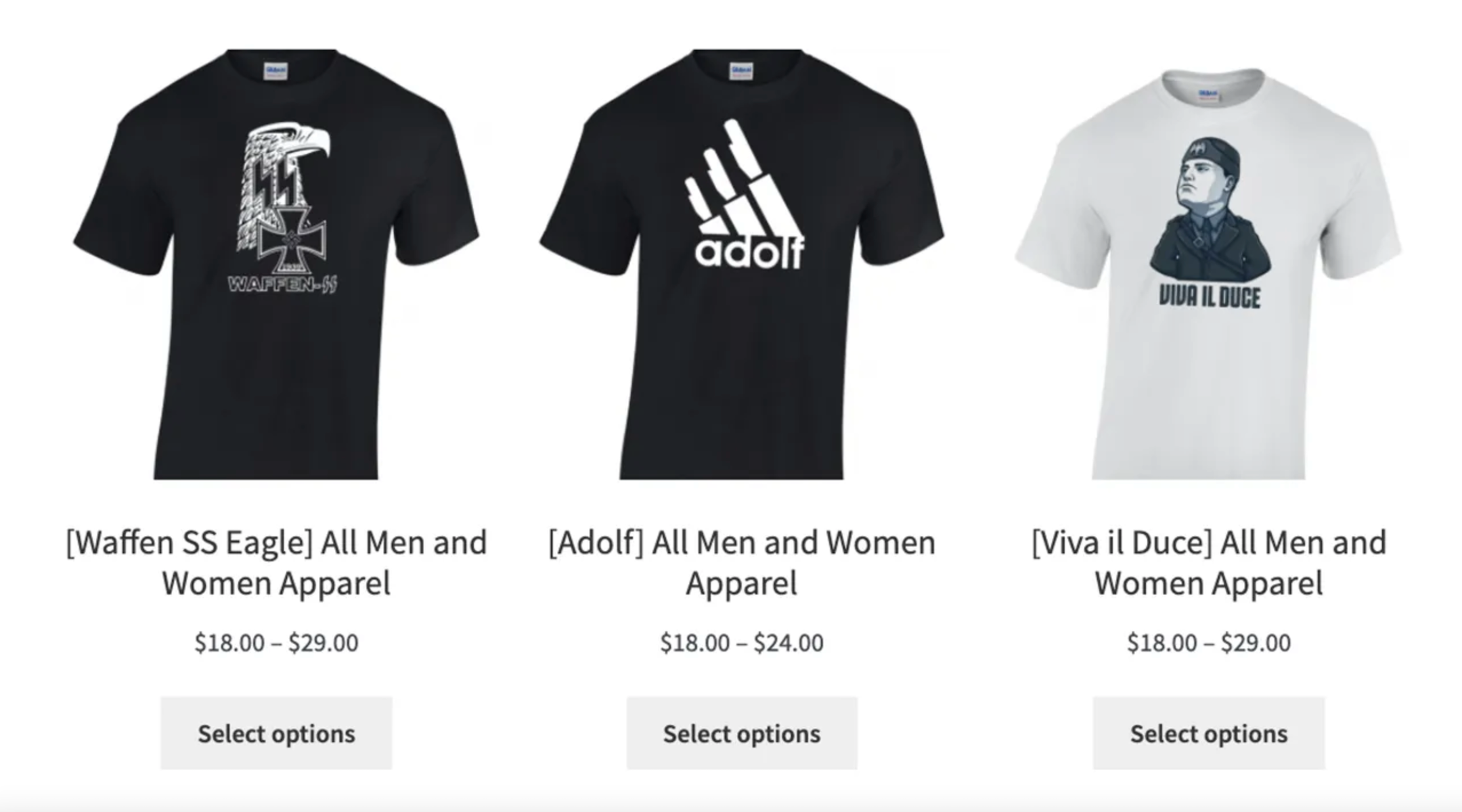 The T-shirts sport imagery such as a Waffen SS symbol; one that uses the Adidas logo, but with "Adolf" instead of "Adidas"; and a "Viva Il Duce" design with a portrait of WWII-era Italian dictator Benito Mussolini. (Screenshot)
Advertisement

(J. the Jewish News of Northern California via JTA) — Jon Minadeo Jr., a 38-year-old man infamous within the Bay Area Jewish community, has launched an online merchandise store selling virulently anti-Semitic and homophobic T-shirts and apparel in an effort to fund propaganda tours across California and beyond — what he calls his “activism.”

Dubbed Goyim Gear, some of the T-shirts bear the “Happy Merchant” anti-Jewish cartoon. One calls the Holocaust a “hoax” using the Hulu video streaming website font and another mimics “Godfather” movie art with the words “The Jew Namer.” Others show portraits of Hitler, one celebrates the Waffen SS and one features an anti-gay slur.

“All proceeds go to the next N.T.N.T.,” a message at the top of the webpage says, referring to what Minadeo calls the “Name the Nose Tour,” outings on which he and others drive around California shouting anti-Semitic slurs and conspiracy theories through a megaphone.

Minadeo, with a group known as the Goyim Defense League, went on a Name the Nose tour last summer in Southern California, driving in a white van scrawled with anti-Semitic messages such as “Jews killed Jesus” and “BLM is funded by Jews.”

They hung banners reading “Honk if you know the Jews want a race war” on a Los Angeles highway overpass, shouted conspiracy theories about COVID-19 to mask wearers and stood outside a Chabad center claiming that “these Jewish terrorists” were behind 9/11.

The T-shirts are advertised as “some fresh GoyGear.”

Minadeo monetizes his video sharing website in part via “donations” to his Bitcoin wallet, a Zelle account and a CashApp account, according to the Middle East Media Research Institute, a terrorism watchdog organization.

The domain registrar for the new merchandise store is Namecheap, a registrar and technology company founded in 2000, according to its website. In response to a query from J., Namecheap said it was not responsible for the content on Minadeo’s site and would not be taking any action against it.

“As a service provider, we are not involved in such investigations,” its email statement said. “We do not serve as the arbiter of fact in this matter.”

Namecheap said to contact the “hosting provider,” but the name was hidden.

A webpage footer says the online store was built using WooCommerce, an eCommerce interface compatible with WordPress. In an email to J., WooCommerce said its software is open source and available to anyone, so “our options for addressing these situations are limited.

“In effect, WooCommerce is similar to software such as Microsoft Word, in that people download and use it independently,” the email said.