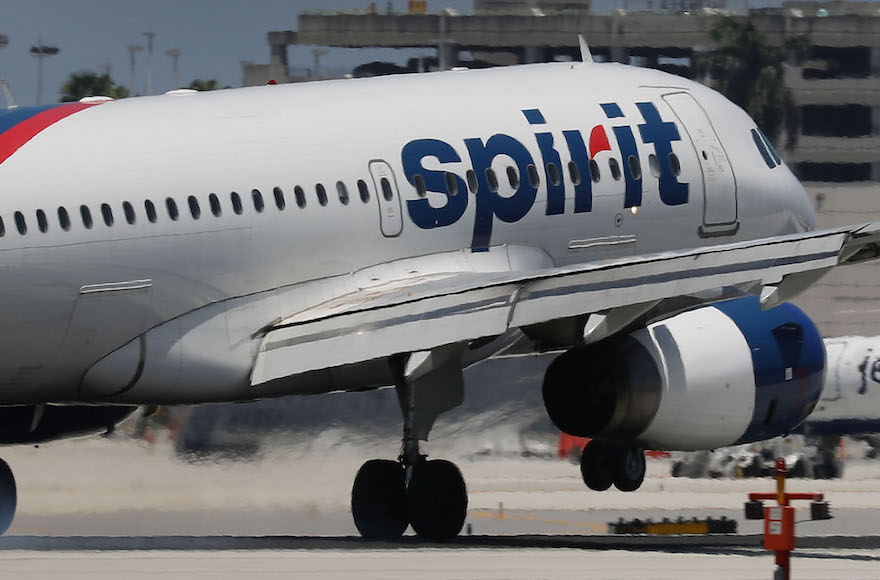 (JTA) — An Orthodox Jewish couple from New York has filed a lawsuit against Spirit Airlines alleging anti-Semitic harassment by a flight attendant on a flight to Florida.

Yisroel Sternberg and Chana Beck and their three children boarded the flight to Fort Lauderdale from Newark Liberty International Airport in January. A flight attendant told them they could not board with the infant car seat they had brought, even though the couple had brought an extra seat to accommodate the child.

Sternberg was seated separately from his wife and children. With his wife now holding the infant in her lap, Sternberg changed to a closer seat so he could help her. He was told by a flight attendant to “shut up” and move back to his original seat, according to the lawsuit.

Another passenger told the couple that he heard the flight attendant refer to them as “the retarded Jews.’’

“At that point, it all becomes crystal clear to the Sternbergs. The flight crew of the flight was discriminating against them because the Sternbergs were Jewish,” according to the lawsuit.

When the plane landed in Fort Lauderdale, the couple were escorted by security, detained and questioned. Their return tickets were voided and they were banned permanently from flying Spirit.

The civil rights and defamation suit was filed May 2 in the U.S. District Court in Fort Lauderdale, the Miami Herald reported Tuesday.

The suit seeks unspecified compensatory and punitive damages for personal humiliation, loss of capacity for enjoyment of life, mental anguish and embarrassment.

A media relations manager for Spirit told the Miami Herald, “Spirit Airlines strives to maintain a welcoming environment for all of our guests, and we have zero tolerance for discrimination. Because of pending litigation, we will not be commenting further.”