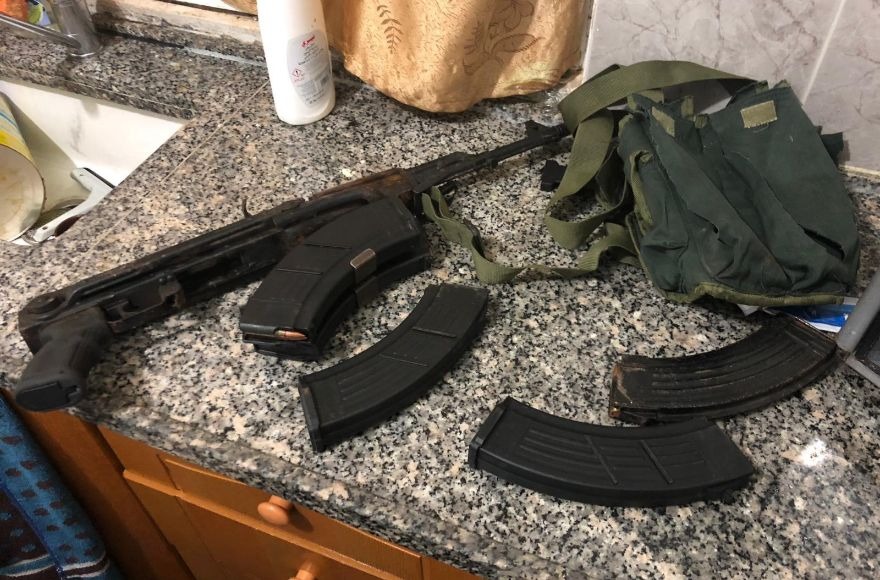 A Kalashnikov assault rifle, ammunition and night-vision equipment to be used in a future attack on Israelis were found during the arrest of Asem Barghouti in the West Bank on Jan. 8, 2019. (Courtesy ISA)
Advertisement

Asem Barghouti was arrested early Tuesday morning in the Dec. 13 attack on a bus stop outside the Givat Asaf settlement, and also for allegedly participating with his brother in the attack four days earlier outside Ofra in the West Bank that seriously injured a pregnant woman and led to the death of her prematurely delivered baby.

Barghouti’s arrest was announced later that day by the Israel Security Agency, which said that he was apprehended in cooperation with the Israel Police and the Israel Defense Forces. According to ISA, he was arrested at the home of an accomplice in the West Bank village of Abu Shukeidim, and was in the midst of planning additional terror attacks. A Kalashnikov automatic rifle and large amounts of ammunition were seized during the arrest.

His brother, Salah, was killed during an attempt to arrest him on Dec. 11.

Upon his arrest, Barghouti was taken for questioning by the ISA.

“The long arm of Israel will reach whoever attacks our citizens,” Israeli Prime Minister Benjamin Netanyahu said in a statement praising the arrest.
“The State of Israel will deal with them to the fullest extent of the law.”

An American-Israeli soldier, Netanel Felber, injured in the Givat Asaf attack remains on a respirator in the hospital.