Personal effects of Yoni Netanyanu turned over to family 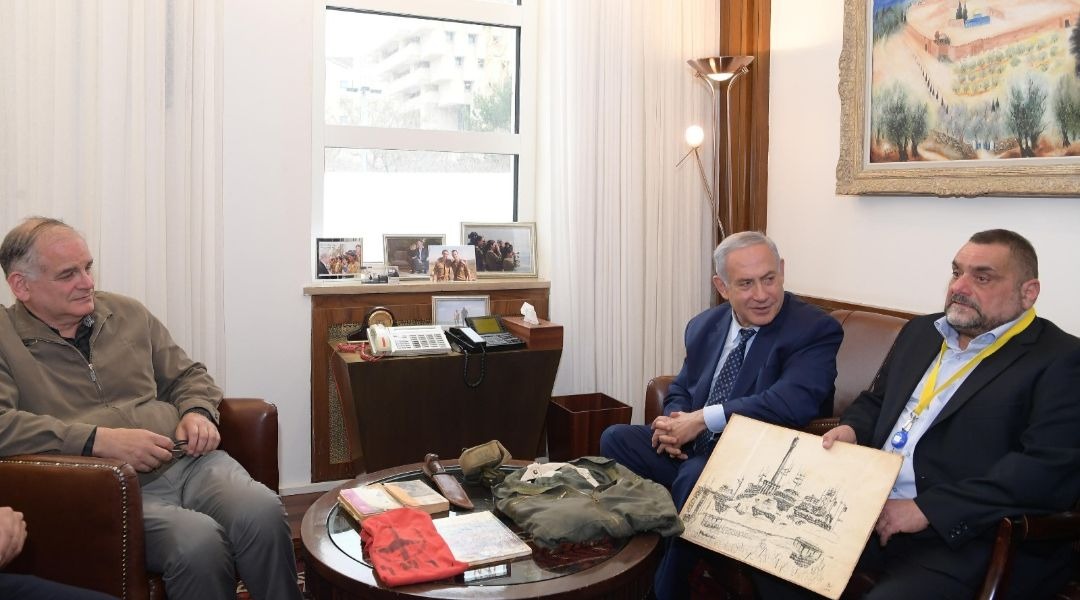 Israeli Prime Minister Benjamin Netanyahu and his brother, Dr. Ido Netanyahu, on April 15, 2019 receive some personal effects of their brother Yoni Netanyahu, who was killed in the Entebbe operation to free hijacked Israeli hostages in 1976, from Yosef Shemesh, who served in the IDF with him. (Amos Ben-Gershom/GPO)
Advertisement

JERUSALEM (JTA) — Benjamin Netanyahu and his brother Ido  received personal items belonging to their brother Yonatan Netanyahu, who was killed during the Entebbe, Uganda operation to free Israeli hostages in 1976.

Israel’s prime minister and his surviving brother, a physician, received the clothing and military gear at from Yosef Shemesh, who served with “Yoni” Netanyahu in the 71st Battalion of the Armored Corps in the Golan Heights, at a meeting at the Prime Minister’s Residence Monday.

Among the items that Shemesh has had since the early 1970s were Yoni Netanyahu’s Passover Haggadah, books that he had given to Shemesh, his coveralls, a t-shirt, gloves, a sleeping bag and a compass.

“We recognize some of these items. We recognize Yoni’s books. Here is the Haggadah, ahead of Passover, that he used at the seder he held for his soldiers. This is a very moving memento from the past. I am very grateful, thank you,” the prime minister said in a statement.

“It is very moving after so many years to see these things, especially the Haggadah that Yoni wrote about in his letters. He wrote about the special seder he held while in the battalion in a very special and very moving letter,” Ido Netanyahu said.

Of the 248 passengers on the hijacked Tel Aviv-Paris flight, 106 were kept hostage; of those, 102 were rescued. Yonatan Netanyahu was the only Israeli commando to die in the raid.