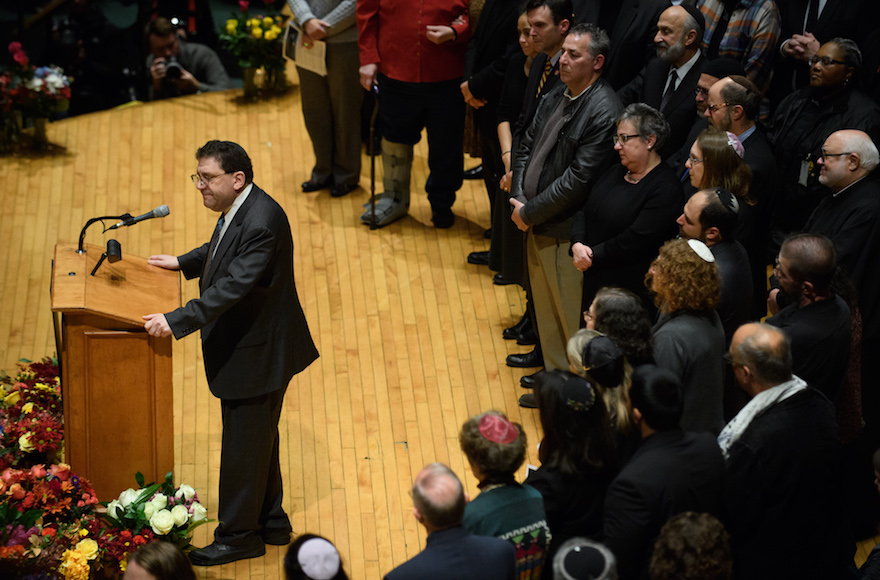 Rabbi Jonathan Perlman speaks to thousands at the Soldiers and Sailors Memorial Hall during a service to honor and mourn the victims of the mass shooting at the Tree Of Life Synagogue, in Pittsburgh, Oct. 28, 2018. (Jeff Swensen/Getty Images)
Advertisement

(JTA) — They didn’t share the same religion, but they shared the same pain.

Ten members of a Pittsburgh congregation who survived the October attack on their building, along with their rabbi, traveled to Charleston, South Carolina, to worship with the members of a church that suffered a similar shooting in 2015.

Eleven worshippers were killed in October in the Pittsburgh attack on the Tree of Life synagogue building, the deadliest on Jews in the United States.

The New Light Congregation congregants came to Charleston on Friday to meet members of the Emanuel AME Church, where nine African-American worshippers were killed in an attack by a white supremacist gunman.

The Rev. Eric S.C. Manning of the Emanuel Church — the oldest African Methodist Episcopal church in the Southern United States — had flown to Pittsburgh shortly after the shooting there to comfort synagogue members and the Jewish community.

In his sermon on Sunday, Manning called on people to love one another and promised the New Light members that the Emanuel congregation will support them as they move through the challenges of healing from the deadly attack, the Charleston-based Post and Courier reported.

Members of the church surrounded the New Light visitors to share hugs and tears, according to the newspaper. On Friday night, they worshipped together at Kahal Kadosh Beth Elohim, a local Reform congregation.