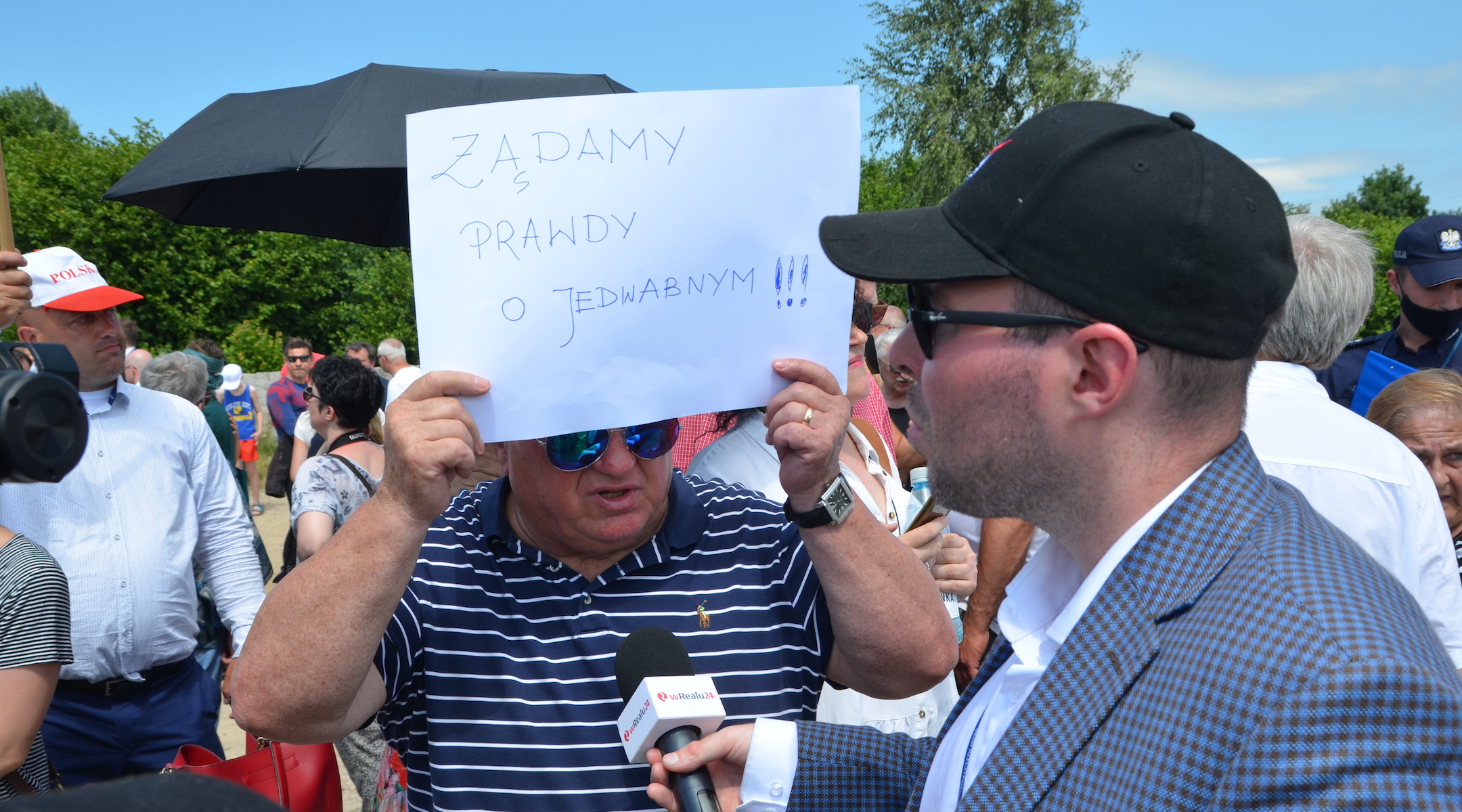 A Polish nationalist holds a sign reading "We demand the truth about Jedwabne," at the site of a Holocaust pogrom in Jedwabne, Poland, July 10, 2021. (Krzysztof Bielawski)
Advertisement

WARSAW (JTA) — Several dozen nationalist protesters disrupted a commemoration ceremony for Jewish victims of a 1941 pogrom in Jedwabne, Poland, symbolizing the country’s fraught debate over who should be blamed for World War II-era atrocities.

The nationalists brought flags and signs and disturbed people praying at the site of the pogrom on Saturday, the exact anniversary of the event. A much larger group, including Poland’s chief rabbi and Catholic clergymen, gathered on Sunday, after the Jewish sabbath, to commemorate the victims.

Chief Rabbi Michael Schudrich told the Jewish Telegraphic Agency that a few nationalists showed up on Sunday as well, but the group was much smaller.

“It was a small group of maybe 5-6 people who actually did nothing to interfere with the ceremony,” he said.

Still, he said the moment points to a “very serious issue,” involving the Polish government’s stance on Holocaust memory.

The Jedwabne pogrom saw well over of the small town’s 300 Jews murdered — although the exact number is not agreed on by experts — most of them in a barn that was set on fire. It was not widely researched before Princeton historian Jan Tomasz Gross published “Neighbors: The Destruction of the Jewish Community in Jedwabne, Poland” in 2001. Gross asserted that the murder was carried out by Polish civilians, not Nazi forces, and the book sparked a debate over Polish complicity in the Holocaust that is still raging.

Some of the nationalists who gathered at Jedwabne on Saturday held signs defaming Gross. They were led by Robert Bąkiewicz, who organizes a march of nationalists through Warsaw every November. This year, organizations that he has ties to received the equivalent of close to $800,000 from Poland’s National Thought Heritage Institute, which is run by the government’s ministry of culture. 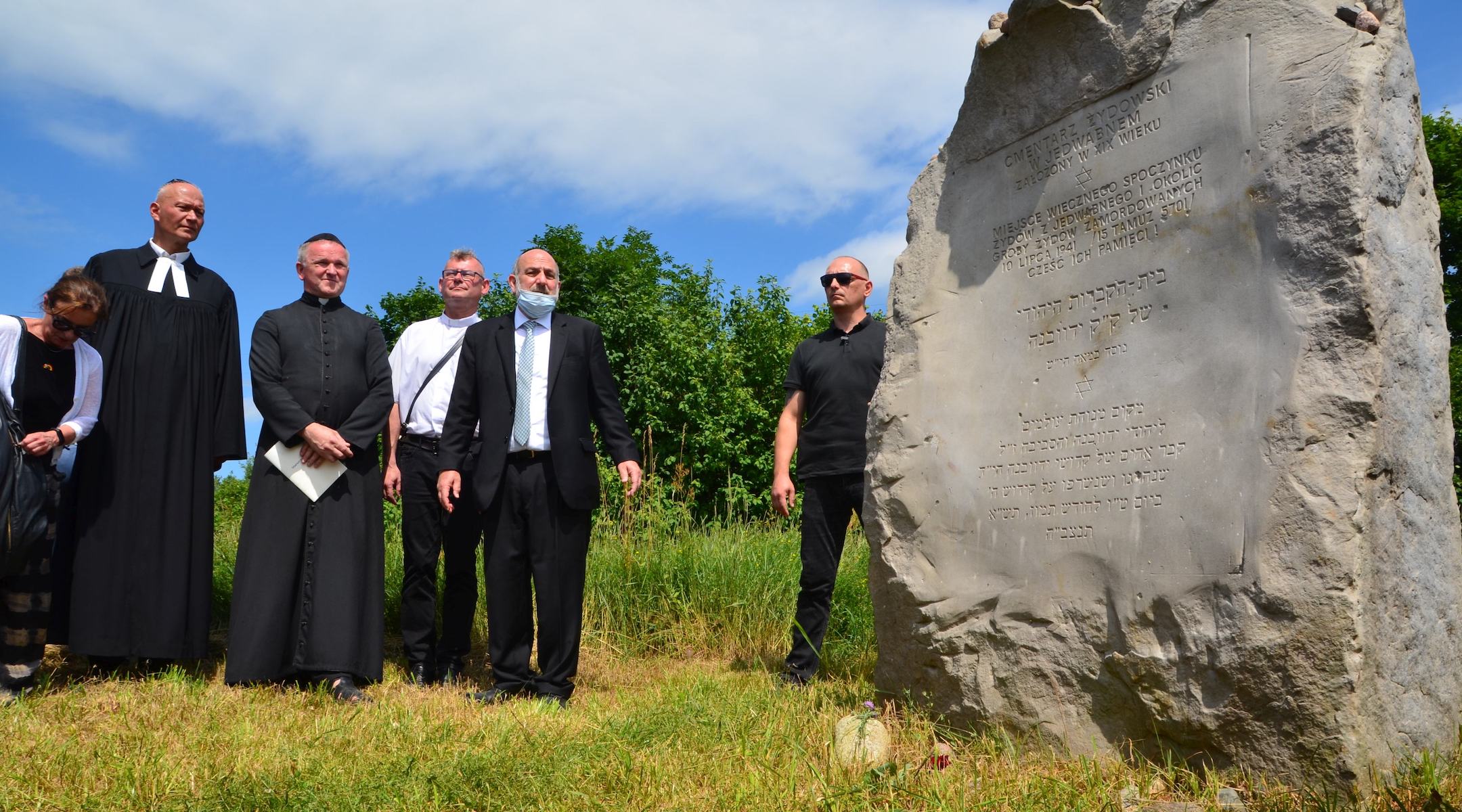 The institute has also supported the production of a film on the pogrom that aims to prove that Germans are mainly responsible for the murder of the town’s Jewish inhabitants.

“There is a much larger issue in that ultra nationalists [and] neo-Nazis are now tolerated by too many of our people in government,” Schudrich said. “Rather than clearly condemning such hate, too many government officials are looking to placate them.”

After Sunday’s commemoration in Jedwabne, several dozen people visited the graves of the victims of other World War II era pogroms in the region, including in Radziłów, Wąsosz and Szczuczyn.

Aleksander Zyskind Goldfarb, the brother of Schudrich’s grandfather, was killed along with many others in Szczuczyn in 1941.

“This large cemetery is a witness to not only how many Jews lived in Jedwabne, but how long they lived here. Hundreds of years,” he said at the Jedwabne site before leading a prayer on Sunday.