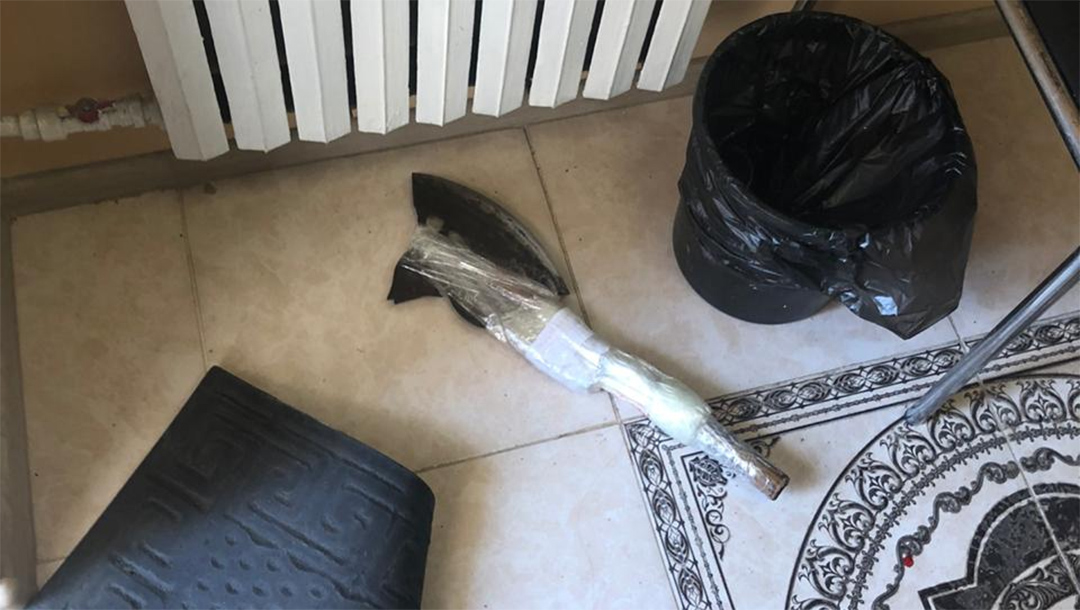 An ax taken from an intruder by a security guard at the synagogue of Mariupol, Ukraine, July 28, 2020. (Christians for Israel)
Advertisement

(JTA) — A security guard at a Ukraine synagogue overpowered a man armed with an ax who broke into the compound shouting “where’s the synagogue?”

The intruder slightly wounded the guard, who managed to wrestle the weapon away from him. No one else was injured in the incident Tuesday in Mariupol, in eastern Ukraine.

Police are looking for the intruder, who fled after breaking free from the grip of the security guard, according to Christians for Israel, a Netherlands-based organization that funds security costs for the synagogue, including the guard’s salary.

The incident happened shortly after morning prayers when Mendel Cohen, the local rabbi, was in the building with two other people. The synagogue was nearly empty because of coronavirus measures.

“Thank G-d, the security guard managed to disarm him,” Cohen said in a statement about the incident sent out by Christians for Israel. “I was in the synagogue at the time this was happening. I went inside and exited through the back door.”

Cohen thanked Christians for Israel, saying he would probably not be alive if it were not for the security they are providing.

Cohen, an emissary of the Chabad movement, has been providing aid from Mariupol to Jews living in the rebel-held territories held by separatists alongside the border with Russia.

“He is in shock but coming to terms with what happened,” Dutch Chief Rabbi Binyomin Jacobs, who facilitated the Christians for Israel sponsorship of the synagogue’s security needs, told the Jewish Telegraphic Agency after Jacobs spoke to Cohen several times Tuesday on the phone.