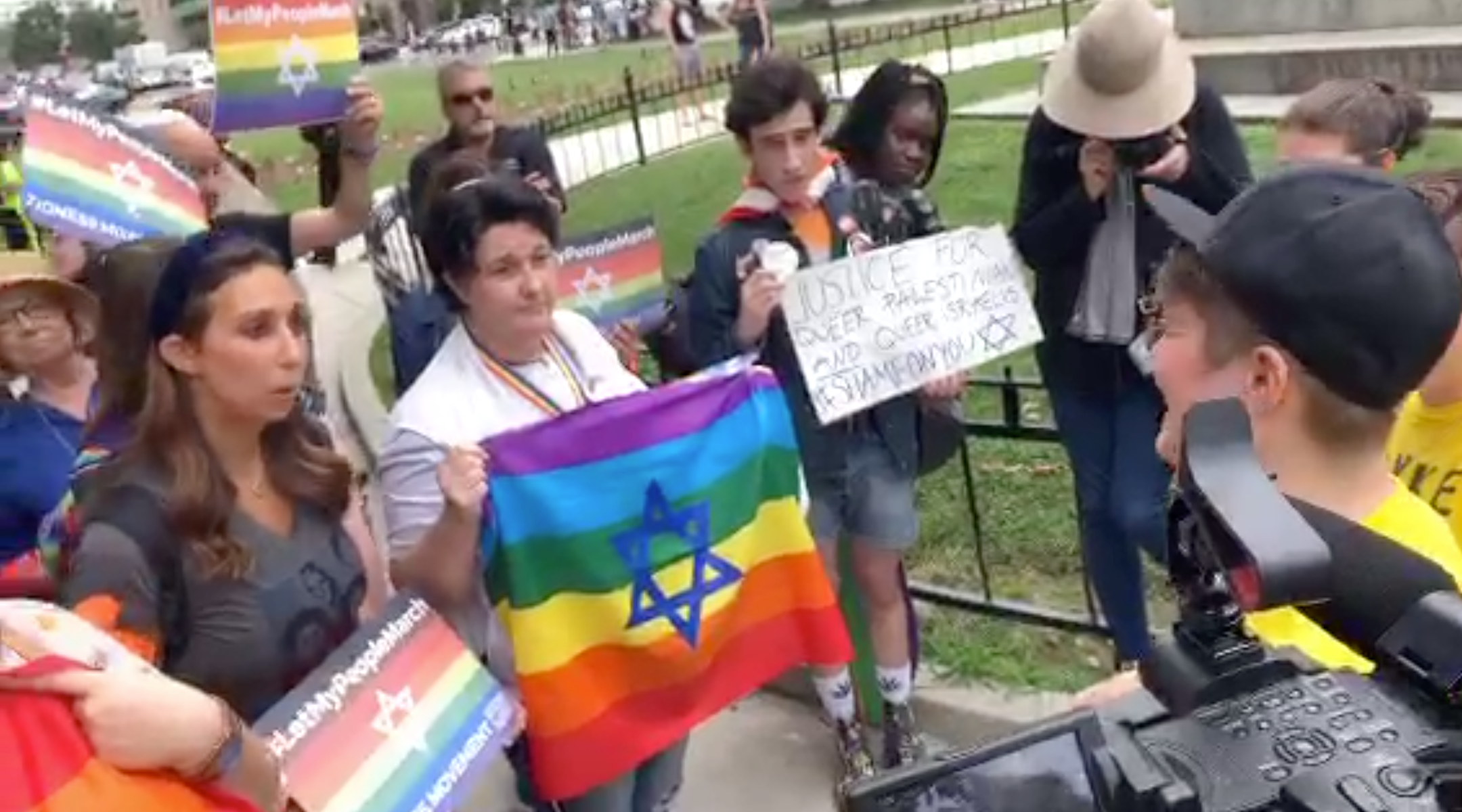 Marchers holding Jewish pride flags debate with marshals of the DC Dyke March on Friday. The marchers were allowed in after being blocked. (Screenshot from Twitter)
Advertisement

(JTA) — A handful of protesters carrying Jewish Pride flags, a rainbow-striped flag with a Star of David in the middle, were allowed into the DC Dyke March despite a ban on the flags.

The march, a leftist alternative to the main LGBTQ parade in Washington, D.C. the next day, said it was banning the flag because it looks too much like the flag of Israel. The march banned the flags of countries with “specific oppressive tendencies.” The flags of Israel and the United States were the only two mentioned specifically in the ban. There was no such ban on Palestinian flags.

Some would-be marchers carrying the Jewish Pride flag were blocked by Jewish marshals at an entrance point to the march. In video taken of the event, Jill Raney, a marshal also affiliated with the left-wing Jewish group IfNotNow, said they could enter if they removed the Star of David from the flag. Jewish stars were welcome in any other context.

“In order to have the Jewish Pride flag not be about Zionism, all you have to do is move the star,” Raney told a group of Jewish marchers holding the flags. “With respect, we are all Jewish dykes here and we just want to march in solidarity with Palestinian dykes, and if y’all want to march also, great.”

The group holding the flags included representatives of Zioness, a women’s group that demonstrates openly as pro-Israel activists in progressive spaces, A Wider Bridge, a pro-Israel LGBTQ group, and the local Jewish Community Relations Council.

“You are creating a binary in which the only way to be a dyke is to explicitly denounce the existence of the Jewish state, which is an important thing for most Jews, the vast majority of Jews in the world” said Amanda Berman, the founder of Zioness. “We support liberation for all dykes. You support the Palestinian flag. You support Palestinian nationalism.”

The marchers were eventually allowed to enter the march. The march aimed to focus on combating gentrification and displacement.

The march’s Facebook page was full of comments criticizing the decision to ban the Jewish Pride Flag, accusing the organizers of placing “an unwarranted burden of proof [on] Jewish dykes that they don’t approve of the actions of another country [in] which they do not vote,” and “discriminat[ing] against gay Jews while marching against discrimination.”