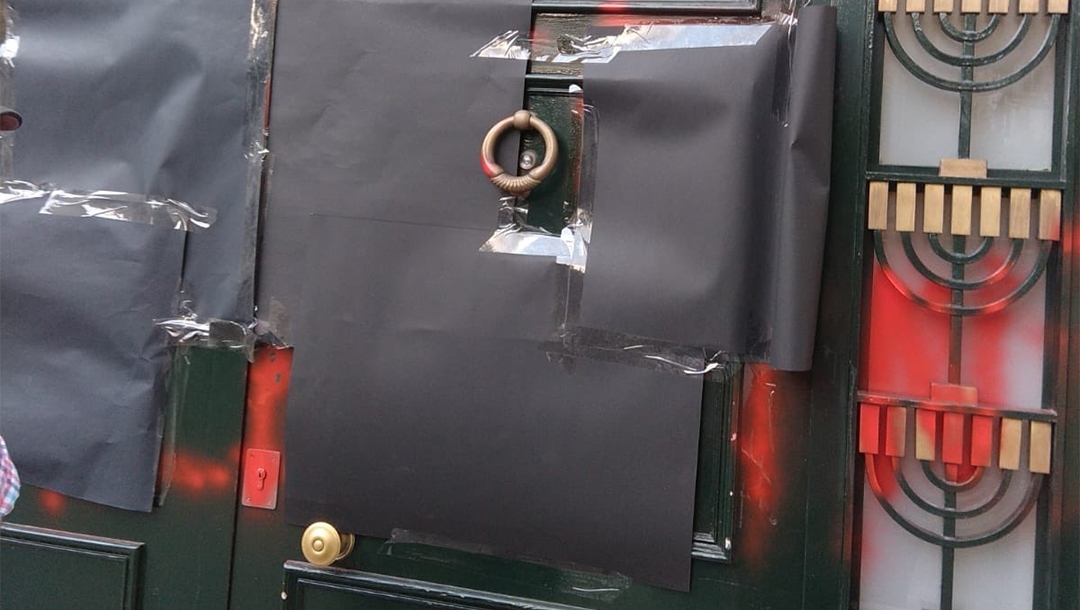 The aftermath of a vandalism at the Synagogue of Barcelona, Spain on Sept. 4, 2019 (Courtesy of David Yabo)
Advertisement

(JTA) — “Free Palestine” was spray-painted on the front door of the largest synagogue in Barcelona.

The vandalism took place Wednesday at the Synagogue of the Jewish Community of Barcelona, the El Nacional website reported Thursday. Police have no suspects.

News of the incident at the main house of worship in the Spanish city prompted much rebuke online.

“Confusing a synagogue with the State of Israel reflects a racist mentality,” Jaume Padrós, president of the Official College of Physicians of Barcelona, wrote on Twitter.

Separately, a court in southern Spain on Monday nullified the adoption of a boycott of Israel as policy in the town of La Rambla, near Cordoba.

The La Rambla City Council had passed a resolution declaring itself a “space free of Israeli apartheid” and a supporter of the Boycott, Divestment and Sanctions movement against the Jewish state, or BDS.

The Contentious Administrative Court number 3 of Cordoba nullified the resolution following a petition by the pro-Israel group ACOM. The resolution, the judge wrote, runs “contrary to the principle of equality and non-discrimination,” ACOM wrote in a statement Thursday.

Legal initiatives by ACOM have resulted in the scrapping of 47 resolutions promoting BDS. Several other groups also have petitioned against BDS in Spain, resulting in multiple additional reversals.