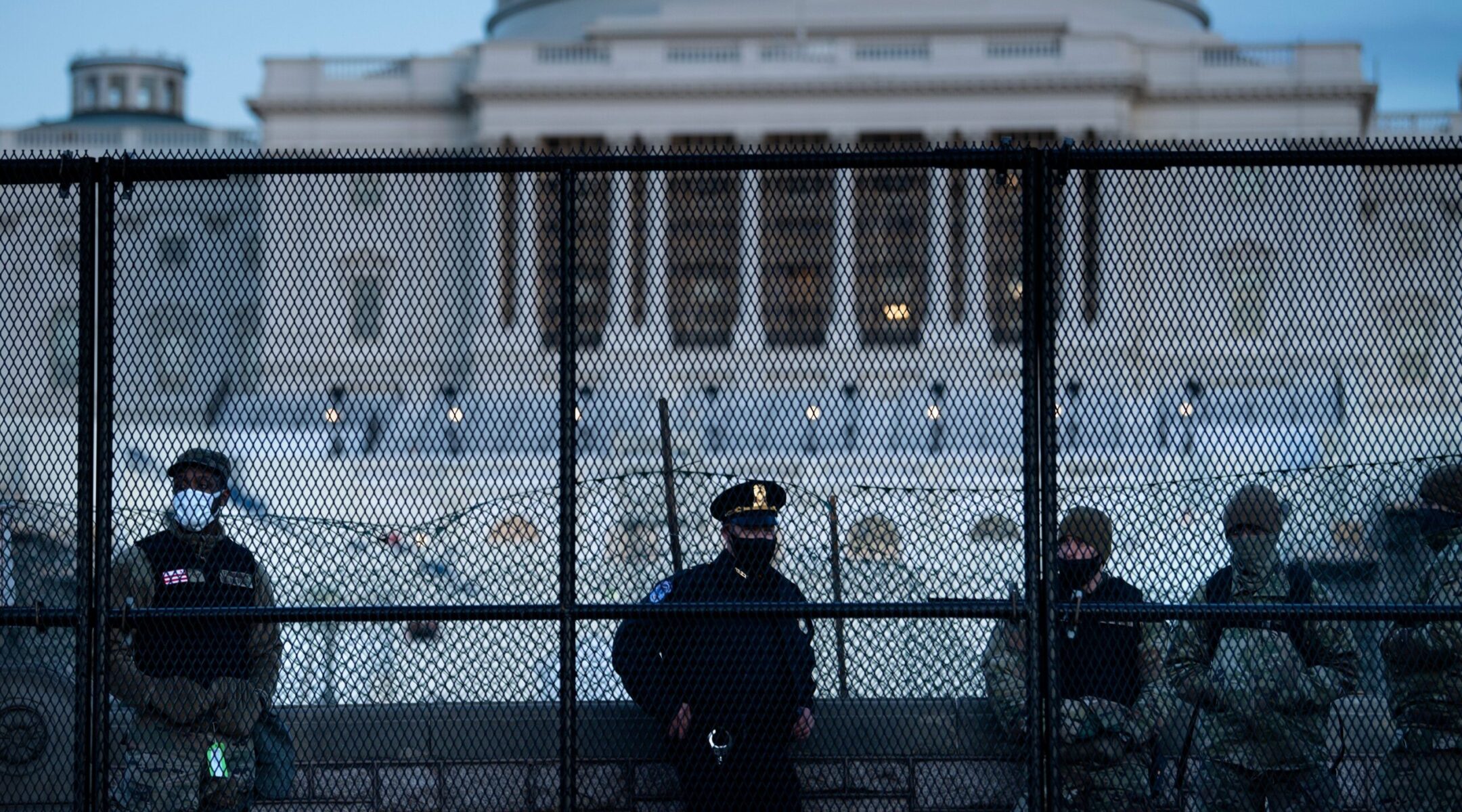 A Capitol police officer stands with members of the National Guard behind a crowd control fence surrounding Capitol Hill a day after a pro-Trump mob broke into the Capitol building, Jan. 7, 2021 (Brendan Smialowski/AFP via Getty Images)
Advertisement

(JTA) — A Capitol Police officer has been suspended after a copy of “The Protocols of the Elders of Zion,” an infamous anti-Semitic document, was found near his work area.

The officer, part of the force that was overwhelmed during the Jan. 6 insurrection on the U.S. Capitol, is under investigation “after anti-Semitic reading material was discovered near his work area on Sunday,” according to the Washington Post.

Zach Fisch, chief of staff to Rep. Mondaire Jones, a Democratic congressman from New York, found the document, which was clipped together and tattered, on a table at the Capitol Police security checkpoint Sunday night. He sent a photo of the document to the Washington Post.

“As I left my office in Longworth yesterday, I discovered something that, as a Jew, horrified me,” Fisch tweeted Sunday night. “At the United States Capitol Police security checkpoint, someone had left vile anti-Semitic propaganda in plain sight.”

The Protocols, first published in Russia in the early 20th century, is one of the most widespread anti-Semitic tracts of all time. It alleges a Jewish conspiracy to control the world. It has been published worldwide and was first printed in the United States by Henry Ford.

The Capitol Police have faced scrutiny since a mob of pro-Trump rioters succeeded in overwhelming most of its officers and breaking into the Capitol on Jan. 6, in an attempt to stop Congress from certifying the results of the presidential election. Some officers were seen being friendly with the rioters and encouraging them. One police officer, Brian Sicknick, died due to injuries sustained during the riot. Dozens more were injured.

“This is both a national security problem and a workplace safety problem,” Fisch tweeted. “Our office is full of people — Black, brown, Jewish, queer — who have good reason to fear white supremacists. If the USCP is all that stands between us and the mob we saw on Jan. 6, how can we feel safe?”