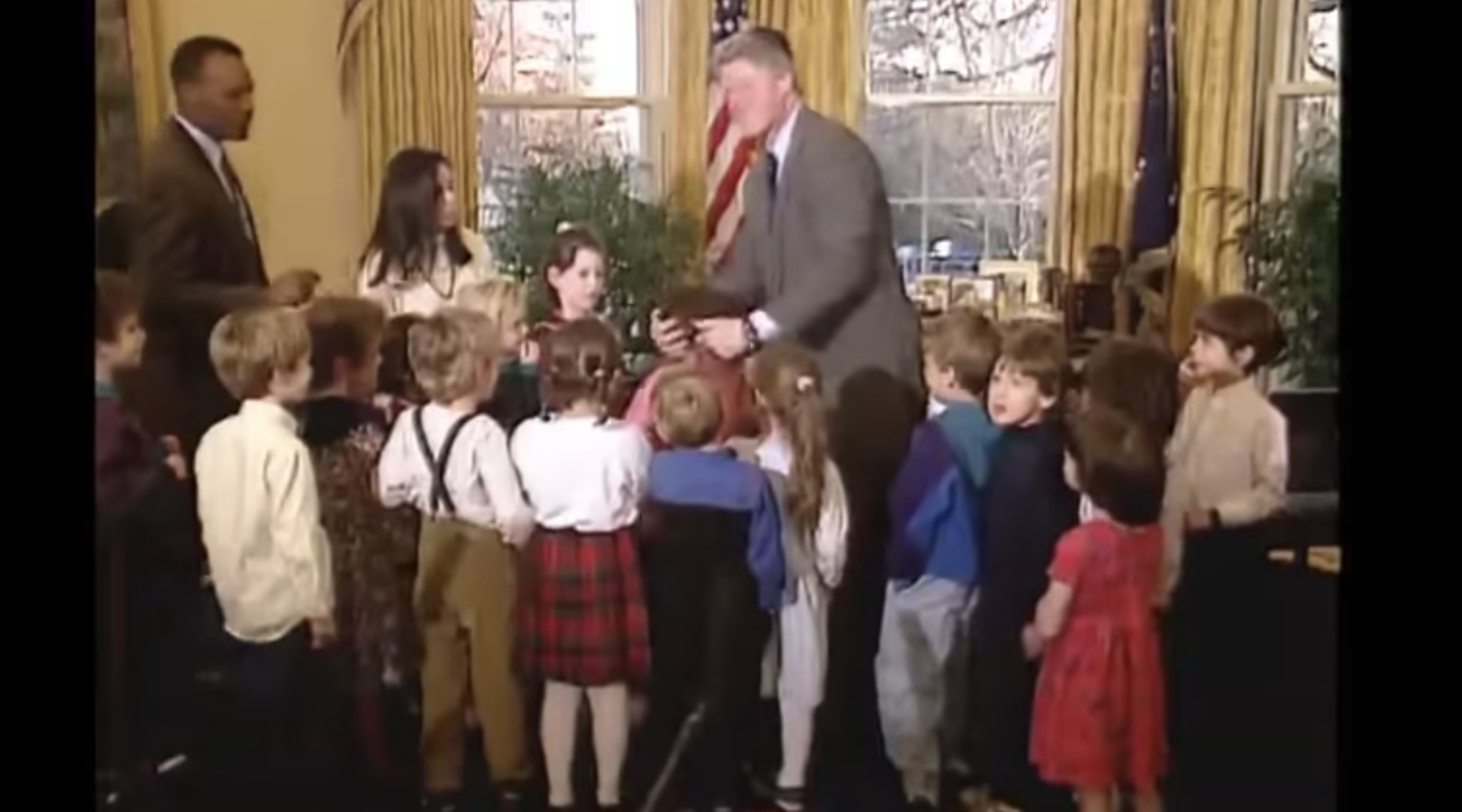 In 1993, President Bill Clinton grabbed Ilana Kattan's hair to stop it from burning after noticing that it had caught fire on the menorah her class had just helped him light at the White House. (Clinton Presidential Library on YouTube)
Advertisement

(JTA) — The incident in 1993 lasted only about 20 seconds, but Ilana Kattan says the time President Bill Clinton stopped her hair from burning during a White House menorah lighting remains her “mic drop” anecdote when she introduces herself.

Kattan, then 7, was at the White House with her class from her Washington, D.C., Jewish school to teach Clinton, celebrating Hanukkah for the first time as president, how to light a menorah and play dreidel.

In a video of the event posted online by Clinton’s presidential library, you can see Kattan turn away from the just-lit menorah and, moments later, Clinton grab her hair as the adults in the room gasp. Clinton grasps her close to him and asks if she is OK.

Within moments, someone has suggested that it’s now time to teach Clinton to play dreidel — and a child has asked the president, as children do, why he’s wearing a Band-Aid. The rest of the event unfolds without incident. (Unless you count Clinton rolling a gimmel and taking the whole pot of gelt from the children.)

Slate caught up with Kattan this week and found that she’s a 33-year-old antitrust lawyer still living in Washington who has a scrapbook of news stories — in English and Hebrew — about the incident. She said she had seen a video but didn’t know if it still existed.

Kattan told Slate that she doesn’t often think about the event, which she said made a bigger impression on the adults on the room than on her; she didn’t even realize her hair had caught fire. But she said she tends not to light candles in her own home, heading instead to friends’ or family members’ houses to celebrate Hanukkah. From the interview:

Has your hair ever caught fire again?

No, no. Not to my knowledge.But even for Hanukkah now, I don’t like lighting candles in my own condo. I don’t usually. I’m fine lighting in other people’s houses, but I think I’m a little bit more cautious around fire.

So you still make a point of celebrating Hanukkah? I know it can be less of a big deal when you’re an adult.

I actually think it’s kind of more of a big deal when you’re an adult, because you kind of get more into the memorabilia, like you get the nice chanukkiyah, or menorah in English, and then, you know, the nice dreidel and stuff like that. It’s different and it’s more decorating and giving gifts to friends than it is when you’re a kid. But I still celebrate it. It’s a great holiday.

Kattan also offered Slate new details about what she was wearing during her class trip to the White House. While other children appeared to be wearing dressy clothes, she said her bright pink shirt was from Israel and featured the Teenage Mutant Ninja Turtles.