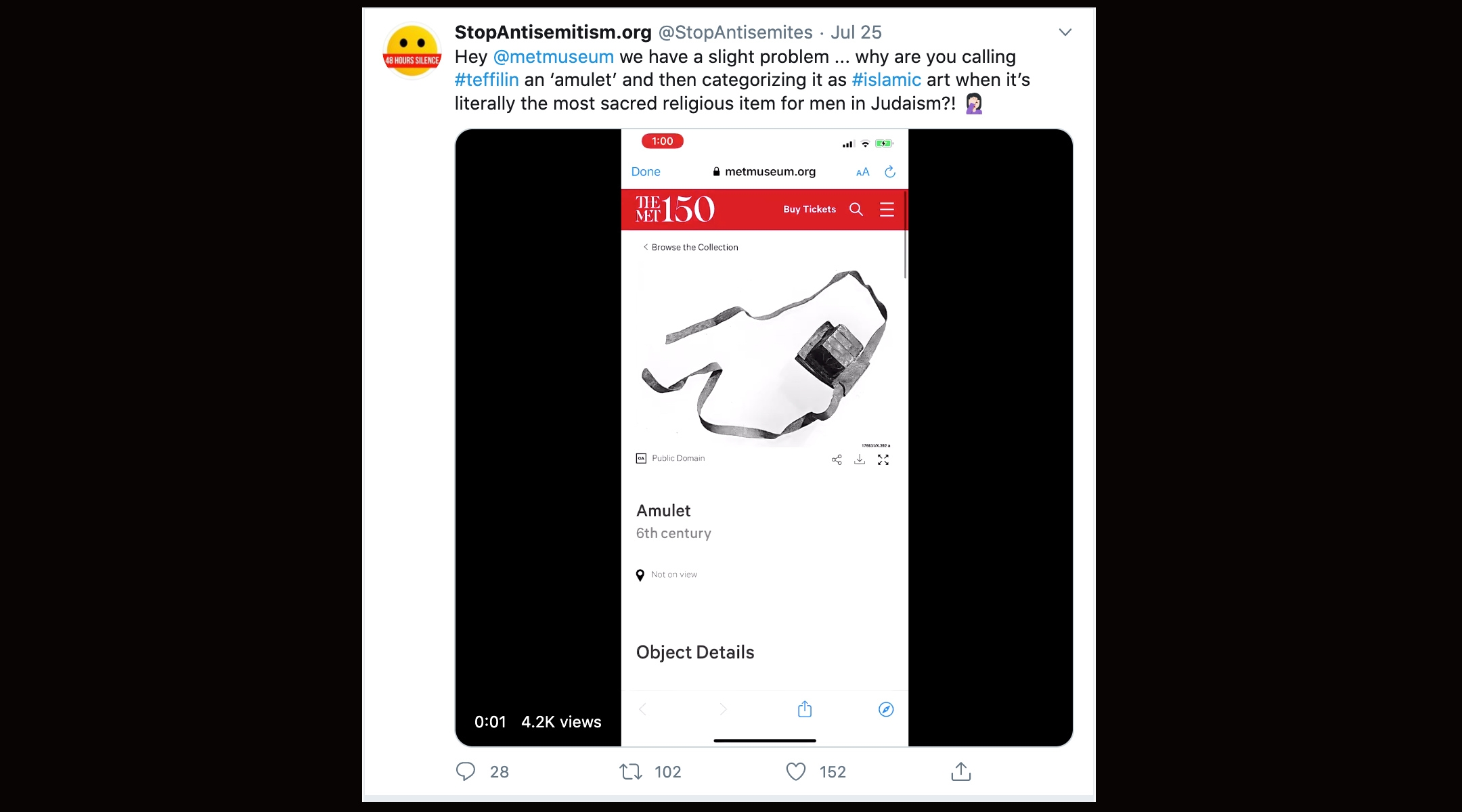 StopAntisemitism.org was one of dozens of accounts to call attention to the Metropolitan Museum of Art's labeling of tefillin in its collection. (Twitter)
Advertisement

(JTA) — The first time an account sharing items held by the Metropolitan Museum of Art tweeted a picture that appeared unmistakably to Jewish followers to be a ritual object used in Jewish prayer with the label “amulet,” a single follower responded with a correction.

“That is not an Amulet it is a Jewish tefillin,” wrote an account from a New York City rug gallery.

The object, which the Met says it acquired in 1962, is listed as part of the museum’s Islamic Art Department as a sixth-century amulet from Egypt. It is dated at A.D. 500–1000.

But a photo of the piece in the collection looks unmistakably like one piece of tefillin, the leather boxes and straps used in prayer by observant Jews. A shin, the Hebrew letter on the portion of tefillin that goes on the head, can be seen in the picture.

That was in November 2019. The second, third, fourth and fifth times the automated account sharing items in the Islamic art collection posted the image, no one responded at all.

But over the weekend the image became the subject of an explosion of interest on Twitter after multiple accounts with many Jewish followers picked up on the item in the museum’s holdings and requested corrections.

One of the first to post it, a Jewish genealogist named Caitlin Hollander, offered a correction and tagged people who might be able to work with the Met to revise the museum’s description.

Other people who shared the image were less constructive in their criticism. And after the account @StopAntiSemites amplified the issue, criticism of the labeling included charges that the museum’s categorization was offensive to Jews.

The museum, which is currently closed because of the coronavirus pandemic, did not respond publicly over the weekend.

But Raphael Magarik, a English professor at the University of Illinois-Chicago whose studies have included the understanding of tefillin by non-Jews, posted a thread Sunday explaining that while the object pictured is likely mislabeled, there are historical arguments for the label.

“There’s no reason not to call tefillin an amulet,” Magarik wrote. “Lexically, the Greek term now commonly used to refer to them (‘phylactery’) originally meant just that, and had a long history of usage in that sense before referring to the specific Jewish items.” He added that while tefillin have been invoked in anti-Semitic discourse in the past, the Met’s labeling more likely reflects how museums catalog objects.

He also added one more point:

Yes but i am always envious of those academics who get to say, "as a specialist on this highly topical problem…" and finally, it's the non-Jewish reception of phylacteries.

Correction (July 28, 2020): This piece originally said that the Metropolitan Museum of Art tweeted the image. It was actually shared by an automated account that posts images from the museum’s collections.