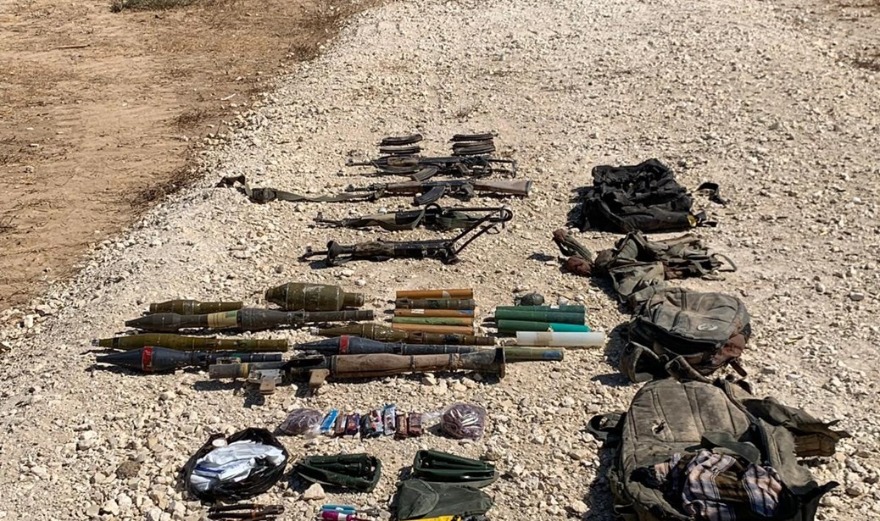 Some of the weapons and supplies carried by four Gazan Palesitnians who tried to infiltrate into Israel and were killed by Israeli troops on Aug. 10, 2019. (Courtesy of the IDF)
Advertisement

JERUSALEM (JTA) — At least two infiltration attempts by Palestinians from Gaza have been thwarted by the Israel Defense Forces in the last two days.

Early on Saturday morning, four armed Palestinians were shot by IDF troops and killed after one of the crossed the Gaza border into Israel, fired at Israeli troops and threw a grenade at them.

Each of the men were carrying AK-47 assault rifles with extra magazines, an RPG grenade launcher and grenades. They were also wearing makeshift uniforms, and carried food and a medical kit.

IDF Spokesman Brig. Gen. Ronen Manelis said in a statement that “a large-scale terror attack was foiled here.” It is not known if they planned to attack soldiers or civilians. They were identified as members of an extremist Salafi Muslim sect and had been involved in weapons training.

After the infiltration attempt Israeli military jets fired on a Hamas outpost in central Gaza, according to reports.

On Sunday morning an armed Gazan Palestinian opened fire on Israeli forces while attempting to infiltrate into Israel and was shot by Israeli troops, according to the IDF. Gaza officials said he was killed and photos released on social media showed him in military uniform with an assault rifle and wearing a bandana of the Hamas military wing Izz ad-Din al-Qassam Brigades.

The IDF responded by shelling what it called Hamas targets located along the border in Gaza.