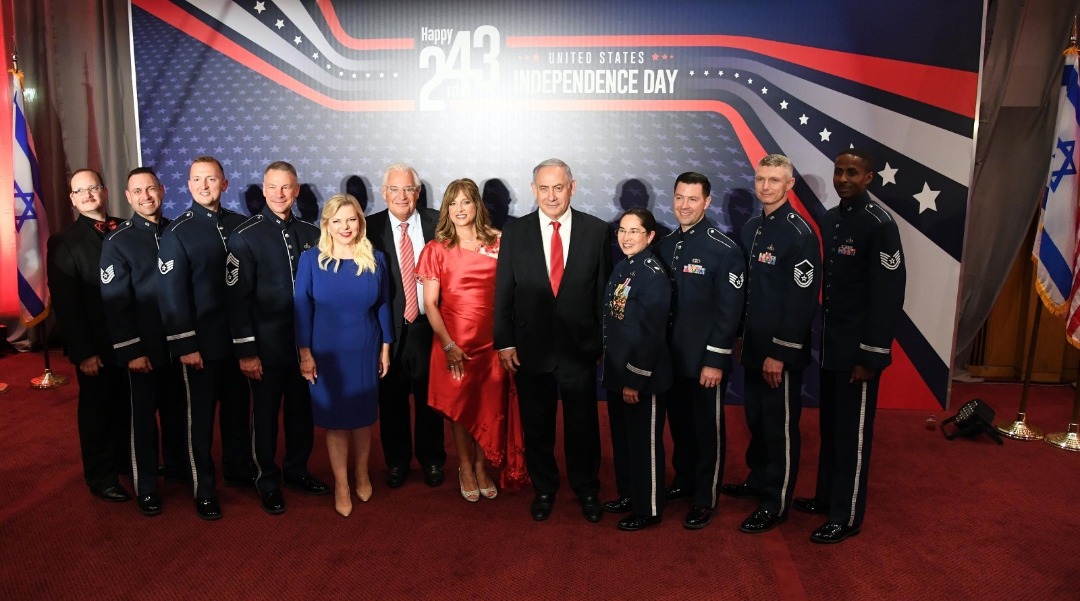 Israeli Prime Minister Benjamin Netanyahu and his wife, Sara, at the celebration of America's Independence Day held for the first time in Jerusalem on July 2, 2019. (Haim Zach/GPO)
Advertisement

(JTA) — The U.S. Embassy hosted its annual Fourth of July party in Jerusalem for the first time days after its ambassador participated in the inauguration of a controversial archaeological tourist site in eastern Jerusalem.

Prior to this year’s celebration at the Jerusalem International Convention Center, the U.S. Independence Day party was held at the ambassador’s residence in Herzliya. Last year, after the embassy’s move to Jerusalem from Tel Aviv, the party was at Airport City, a business park near Ben Gurion Airport outside Tel Aviv.

A bipartisan delegation of 10 congressmen and two senators who are visiting Israel attended the event, which featured an address by Prime Minister Benjamin Netanyahu praising the Trump administration for its support of Israel. He also called for the European countries to reinstate sanctions against Iran now that it has enriched uranium beyond levels allowed under the 2015 nuclear deal.

Netanyahu recalled that on Sunday, he and U.S. Ambassador to Israel David Friedman, along with their wives, visited the tunnel entrance to the Pilgrimage Road in the City of David and oversaw the opening of the ancient historical site that brought Jewish pilgrims from the Shiloach pool to the Western Wall.

Friedman, who had delivered the final sledgehammer blows to the wall blocking the historic tunnel, told guests at the embassy celebration that the American people have many connections to Jerusalem.

The Prime Minister’s Office announced that Netanyahu spoke by phone on Tuesday night with President Donald Trump to congratulate the United States on its Independence Day. The statement said that Trump “reiterated his commitment to the security of Israel and to the continued strengthening of the alliance between the U.S. and Israel.”

That’s all folks! Thank you for joining us for the first ever independence day celebration in the holy city of Jerusalem. #July4thJLM pic.twitter.com/DwKX3UEz1B