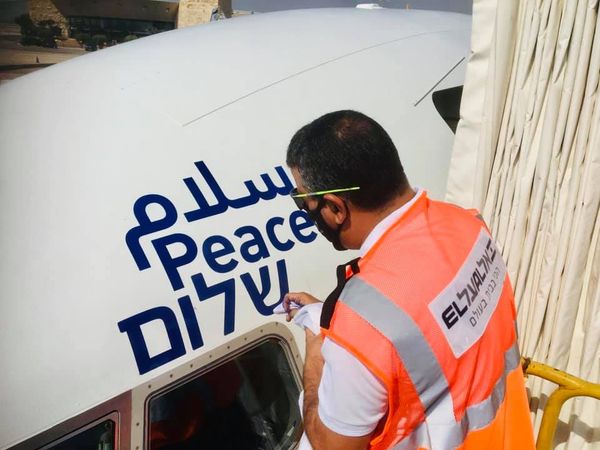 The El Al plane set to fly to the United Arab Emirates for the first time is decorated with a sign reading peace in English, Hebrew and Arabic, Aug. 31, 2020. (El Al Facebook page)
Advertisement

(JTA) — The United Arab Emirates’ law boycotting Israel has been abolished, on the eve of a first delegation of Israeli and U.S. officials to visit the country since the historic normalization deal announced earlier this month.

UAE President Sheikh Khalifa bin Zayed Al Nahyan on Saturday issued a decree canceling the law, paving the way for trade and business deals between companies in the two countries. The law was enacted in 1972, shortly after the formation of the UAE.

The decree comes ahead of the arrival of an Israeli delegation, accompanied by U.S. officials including White House senior advisor Jared Kushner and Middle East peace negotiator Avi Berkowitz, to continue to discuss the recently announced normalization agreement. That delegation is scheduled to arrive in Abu Dhabi on Monday, on the first-ever commercial flight between Israel and the UAE.

To prepare for the historic flight. El Al painted the plane set to make the journey with the message “Peace” written in English, Hebrew and Arabic. The plane — alone among El Al’s fleet to be flying during the pandemic, which has grounded most flights into and out of Israel — is scheduled to pass through Saudi Arabian airspace on its way to the UAE, a pathway that, if approved by the Saudis, would also be unprecedented in Israel’s history.

“I welcome the decision of United Arab Emirates President Sheikh Khalifa bin Zayed to cancel the law on boycotting products from Israel and economic contacts with Israelis,” Israeli Prime Minister Benjamin Netanyahu said in a statement. “This is an important step in promoting prosperity and peace in the region.”

Kushner, the Jewish son-in-law of President Donald Trump, met with Netanyahu in Jerusalem on Sunday. Following the meeting, he said Trump administration’s Israel-Palestinian peace proposal that provided the “breakthrough” that led to the normalization agreement and vowed that agreements with more countries would follow.

“Four years ago, my father-in-law asked me to work on peace in the Middle East. I’ve given it my all. There’s still much work to accomplish, but the Abraham Accord is a giant step forward. To play a role in (its) creation — and I say this as the grandson of two Holocaust survivors — it means more to me and to my family than I can ever express,” Kushner said. “We will continue to pursue peace between Israel, the biblical homeland of the Jewish people, and its Arab and Muslim neighbors and I have never been more hopeful about peace.”

The talks this week will focus on business and academic cooperation in the areas of aviation, tourism, trade, finance, health, energy and defense, according to reports citing information from Netanyahu’s office. Security matters will be part of a separate meeting in the next two weeks.