US will recognize Israel’s West Bank annexation with conditions, US ambassador says 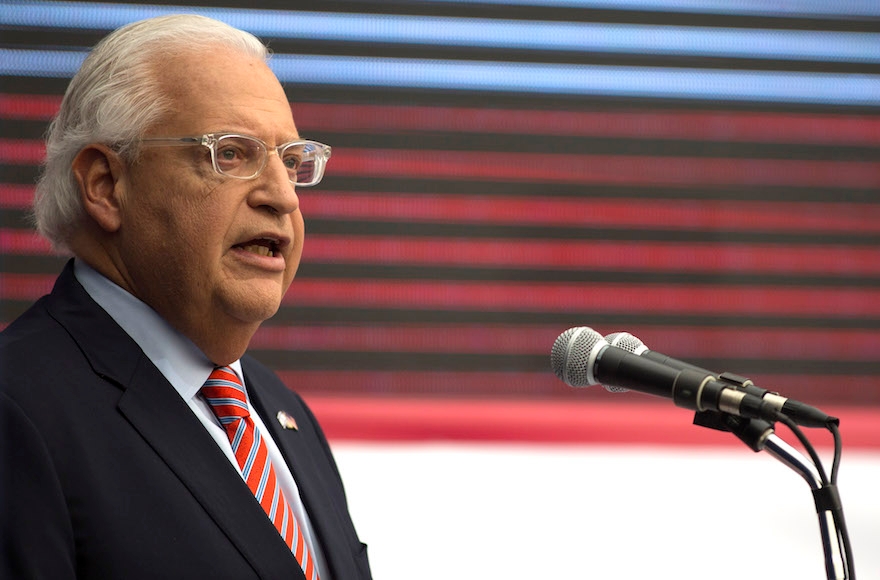 JERUSALEM (JTA) — The United States is ready to recognize Israeli sovereignty over the Jordan Valley and other parts of the West Bank with conditions, the U.S. ambassador to Israel told an Israel newspaper.

In an interview with the Israel Hayom daily, David Friedman said Israel must freeze building in other parts of the West Bank and prepare to reenter peace negotiations with the Palestinians on the basis of the Trump peace plan.

The plan requires the Israeli prime minister to agree to negotiate with the Palestinians “in good faith” for four years, which Benjamin Netanyahu has already agreed to. Friedman noted in the interview that the Palestinians have rejected the deal, which also mandates a settlement building freeze on the 70 percent of the West Bank that would make up a future Palestinian state.

Excerpts of the interview with Friedman, conducted to mark the second anniversary of the U.S. Embassy’s move to Jerusalem from Tel Aviv, were published Wednesday. The full interview is scheduled to be published Friday.

Israel Hayom, which is owned by philanthropists Sheldon and Miriam Adelson, is seen as being an advocate for Netanyahu. The Adelsons, major givers to Republican candidates, have backed Donald Trump and said they will do so in the 2020 presidential election.

Friedman said the United States would not impose any new conditions not found in the Trump administration’s peace plan, which was rolled out in January. He said the U.S. will be ready to recognize Israeli sovereignty following its declaration by Israel and its government agrees to stipulations of the plan.