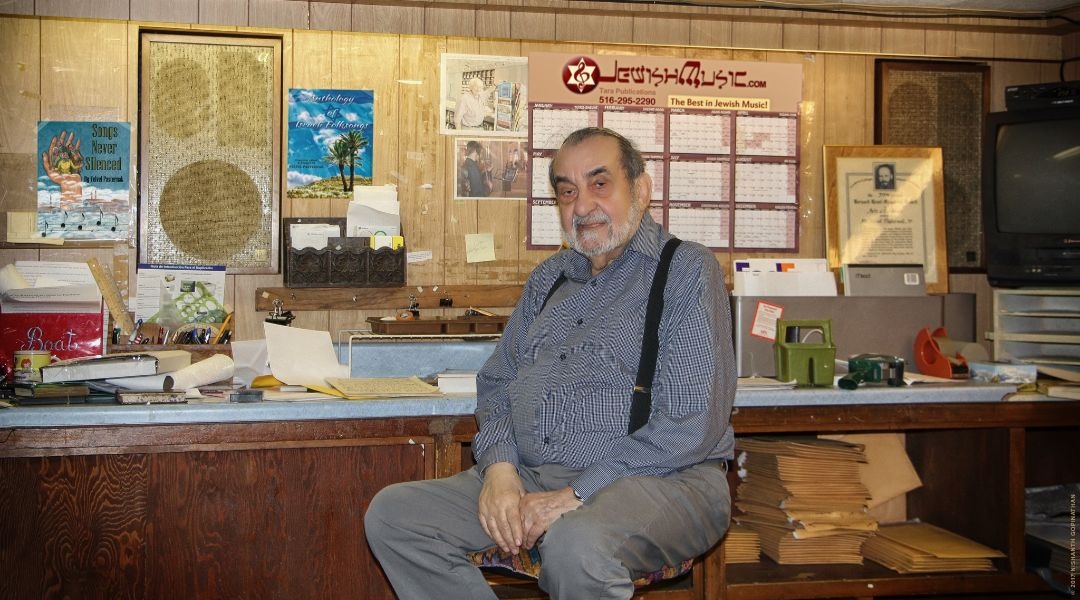 Velvel Pasternak in the offices of his company Tara Publications, located in the basement of his Long Island, New York home, (Velvel Pasternak Memorial Page/Facebook)
Advertisement

(JTA) — Musicologist and publisher Velvel Pasternak, who published more than 150 volumes of Jewish music, has died.

Pasternak, who also conducted and arranged music, died Tuesday in New York City. He was 86.

He founded Tara Publications in 1971. The goal of the company was the publication, preservation and dissemination of the heritage of Jewish music, its website says.

The earliest publications were collections of Hasidic songs based on recordings arranged and conducted by Pasternak. These were followed by Israeli, Yiddish, klezmer, choral, cantorial and instrumental music collections. He also published anthologies of Sephardic music, including Ladino, Spanish-Portuguese, and from Bosnia, Sarajevo and Calcutta. He also published a volume of Holocaust music.

Pasternak, a Toronto native, was the son of Polish immigrant parents. He received a bachelor’s degree from Yeshiva University and studied at the Juilliard School, and received a master’s in music education from Columbia.

He realized in the late 1960s that there was a need for books of Hasidic music with melody lines and chords after being contacted by the families of Orthodox Jewish brides-to-be who found that the bands they wanted to hire to play at their weddings only knew one or two Jewish songs.

Over the years he moved from printed books to e-books, and from cassettes and CDs to MP3s. He later added downloadable sheet music.

Last year, to mark 50 years since the publication of his first Jewish music book, he published “The Jubilee Songbook,” including 240 selections from his previously published music books, providing an overview of popular Jewish music of the 20th and 21st centuries.

In a blogpost to mark his 50 years in Jewish music publishing, his daughter Shira Pasternak Be’eri noted that his work was significant in “preserving an entire heritage that had never been documented by anyone else.”

He is survived by his wife, Goldie; five children, and grandchildren. Pasternak was buried in Israel.