West Bank annexation by Israel would lead to ‘massive conflict’ with Jordan, its king says 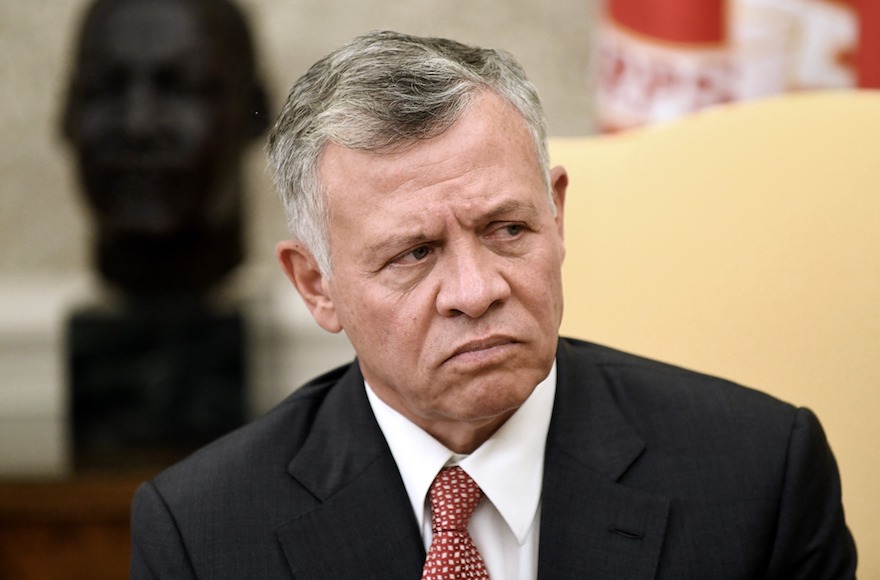 King Abdullah II of Jordan at a meeting with President Donald Trump in the Oval Office of the White House, June 25, 2018. (Olivier Douliery/Pool/Getty Images)
Advertisement

(JTA) — King Abdullah of Jordan said that “if Israel really annexed the West Bank in July, it would lead to a massive conflict” with his country.

Abdullah in an interview published Friday in the German Der Spiegel weekly magazine was responding to a question on what would happen should Israel “take advantage of the opportunity that [President Donald] Trump has created to seize large parts of Palestine.”

Israeli Prime Minister Benjamin Netanyahu has urged his coalition partner, Benny Gantz, to support annexation of the Jordan Valley and some Israeli settlement in the West Bank in the coming months.

Asked whether he would pull out of the peace treaty that Jordan signed with Israel in 1994, Abdullah told Der Spiegel: “I don’t want to make threats and create an atmosphere of loggerheads, but we are considering all options. We agree with many countries in Europe and the international community that the law of strength should not apply in the Middle East.”