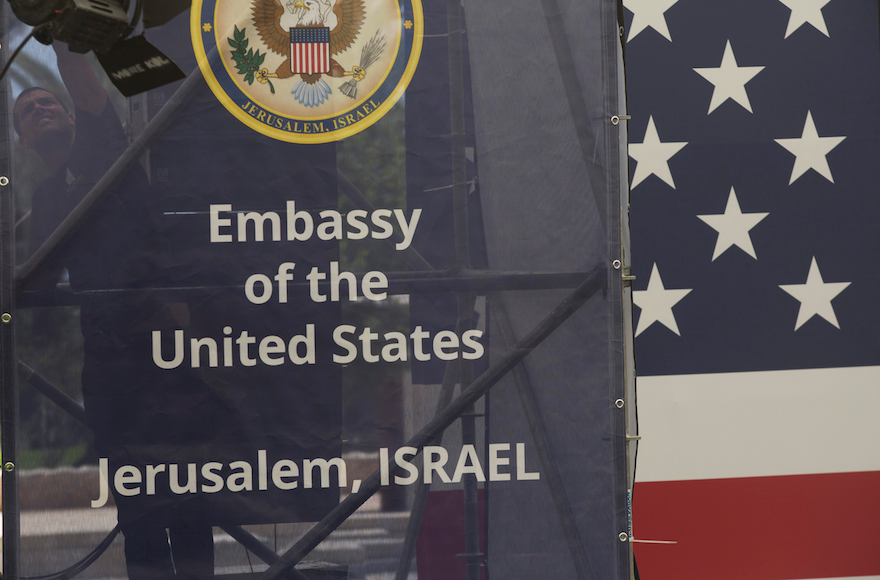 Israeli workers prepare the ceremony stage inside the U.S. consulate that will act as the new U.S. embassy, Jerusalem, Israel, May 13, 2018. (Lior Mizrahi/Getty Images)
Advertisement

WASHINGTON (JTA) — The Trump administration ended the practice in effect for more than two decades of waiving a law requiring the move of the U.S. Embassy to Jerusalem.

Secretary of State Mike Pompeo said in a statement Wednesday that the waiver no longer was necessary. President Donald Trump moved the embassy to Jerusalem last year on May 14, and in March, Ambassador David Friedman moved into a residence in a building in western Jerusalem that formerly functioned as a consulate.

Those acts fulfilled the requirements of a 1995 law calling for the move of the embassy to Jerusalem. Presidents Bill Clinton, George W. Bush and Barack Obama, who insisted that the status of Jerusalem should be determined in a peace agreement, chose not to move the embassy. They exercised a clause in the law that the move could be waived every six months for national security reasons.

“Twenty-three years ago, Congress overwhelmingly voted in support of moving the U.S. embassy to Jerusalem,” Pompeo said in a statement. “Successive administrations refused to move the embassy, and instead exercised Presidential waivers to avoid the Act’s restrictions. On December 6, 2017, the President boldly decided to recognize Jerusalem as Israel’s capital and instructed the Department of State to relocate the U.S. embassy to Jerusalem. We proudly continue to implement that decision today.”