Yosef Kleinman, the youngest survivor to testify at Eichmann trial, dies at 91 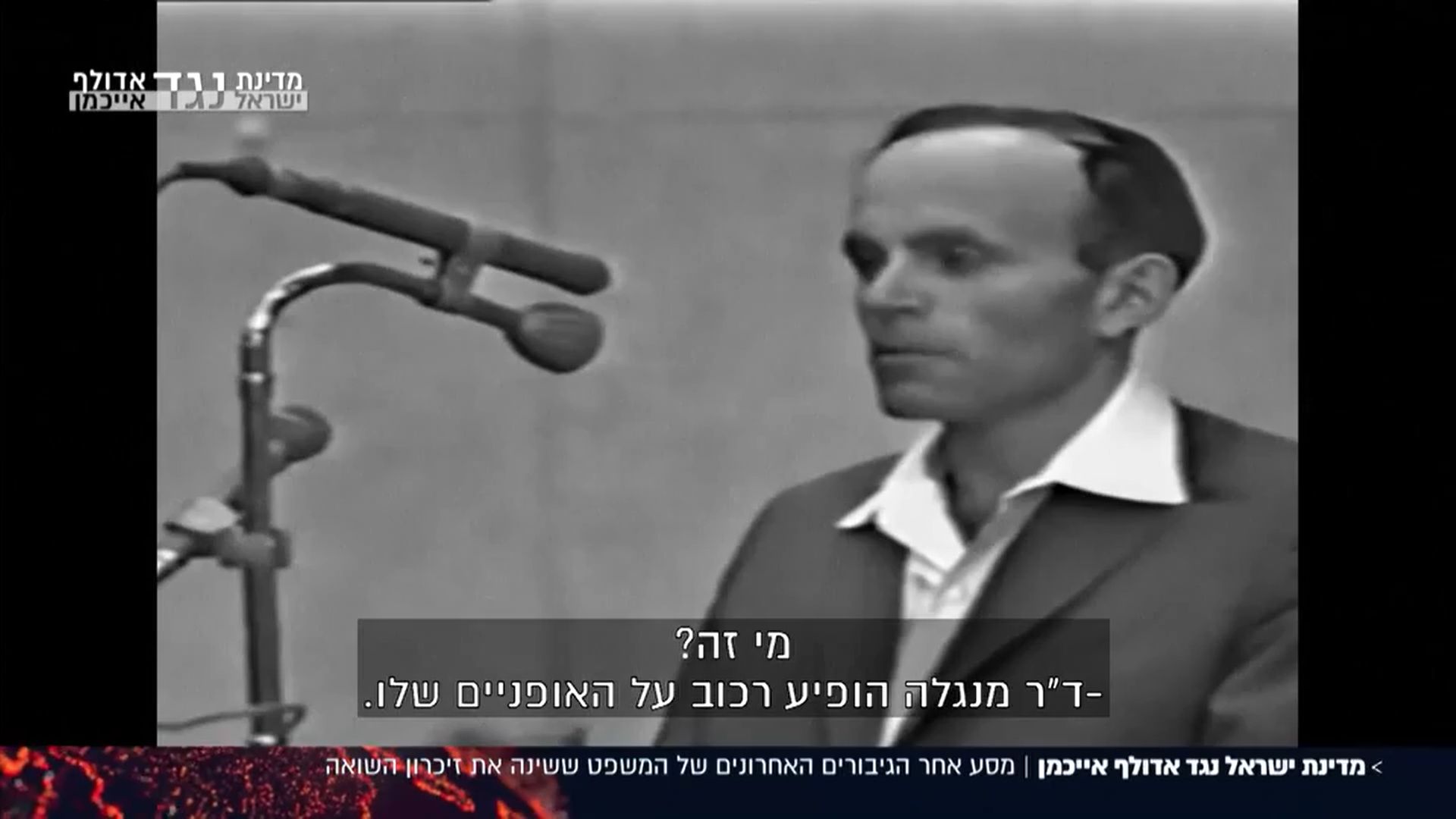 Yosef Kleinman testifies at Adolf Eichmann's 1961 trial in Jerusalem in archival footage broadcast in a documentary on Israel's Channel 13 in 2019. (Screenshot)
Advertisement

(JTA) — Yosef Kleinman, the youngest Holocaust survivor to testify at the trial of Nazi leader Adolf Eichmann, has died at 91.

Kleinman, who lived in Jerusalem, died Tuesday, according to Akiva Weisz, a reporter for Israel’s Kan public broadcaster. Weisz posted the notice on Twitter.

Kleinman was one of 110 witnesses at the 1961 trial of Eichmann, the most senior German official in charge of the extermination of the Jews, and at 31 was the youngest. His testimony, delivered just after another witness fainted, was about the fate of Jewish youths at Auschwitz.

Deported to Auschwitz in 1944 from Budapest when he was 14, Kleinman saw his mother and younger sister sent to their deaths.

In vivid terms that riveted the trial judges, Steinman described Josef Mengele, the physician at Auschwitz whom Steinman referred to in his testimony by his sobriquet, “The Angel of Death,” arriving at a soccer field on a bicycle with a measuring device. It became immediately clear to the youths gathered on the field that those who were shorter than the device’s measurements would die.

“Every one of us stood straight, each one of us sought an extra centimeter of height,” Kleinman said at the trial. He immediately discerned that he was not tall enough. His brother gave him pebbles to put in his shoes to get to the requisite height. Through some maneuvering, Kleinman remained with his brother in the line of those destined to slave labor.

Kleinman said the youths, who were grouped in the camp with the Roma, soon were able to tell whether humans were being killed in the crematoria.

“We became experts on smoke,” he told Israel’s Channel 13 in a 2019 documentary.

His testimony helped send Eichmann to the gallows.

Kleinman and his brother would get out of Auschwitz by sneaking into a work detail sent to Dachau. He told reporters that a Jewish soldier among the Americans liberating the camp gave him a shirt to wear, which he kept his entire life.

Following liberation, he and his brother wandered around Europe until they joined a ship to Cyprus, where they were interned until they were allowed to immigrate to prestate Israel in 1947. He served in the Israeli army and with his brother later opened a carpentry business.

Around the time of his testimony, Kleinman began to encourage Holocaust remembrance authorities in Israel to compile the stories of the youths who perished in the Holocaust, which until then had largely been unknown. He became a much-wanted speaker at schools and to troops.

He kept the striped hat he was forced to wear at Auschwitz his entire life. 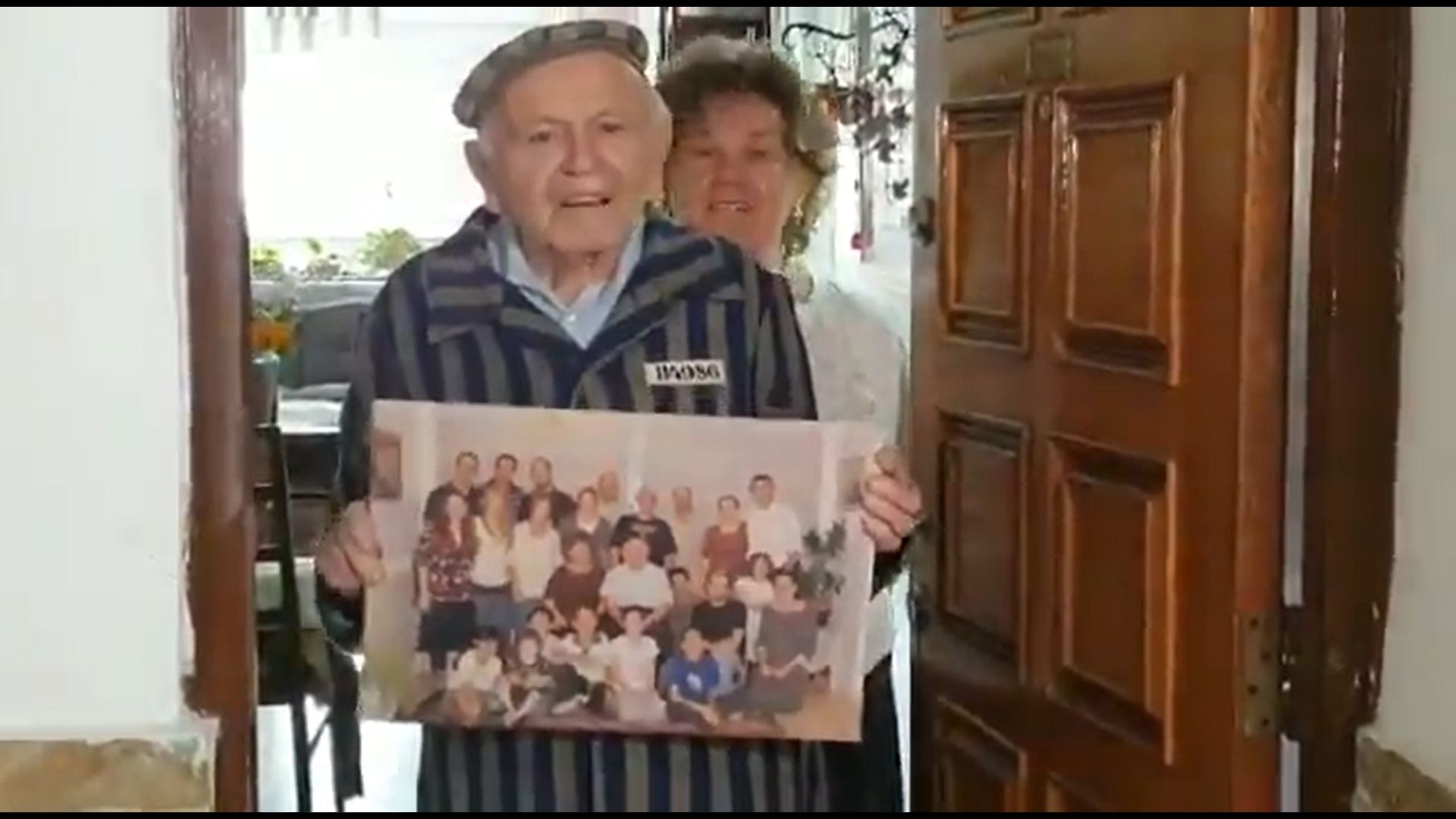 Yosef Kleinman, an Auschwitz survivor who testified at the trial of Adolf Eichmann, poses for a video outside his apartment in Jerusalem on Holocaust Remembrance Day, Yom Hashoah, April 21, 2020. (Akiva Weisz Twitter feed)

After the siren on Holocaust Remembrance Day each year, he would emerge from his Jerusalem apartment wearing the cap and holding up a big portrait of his large family arrayed around him and his wife, Chaya, who is also a survivor. There were three children, 16 grandchildren and four great-grandchildren as of 2019.

“Am Yisrael Chai,” he would repeat. “The people of Israel live.”