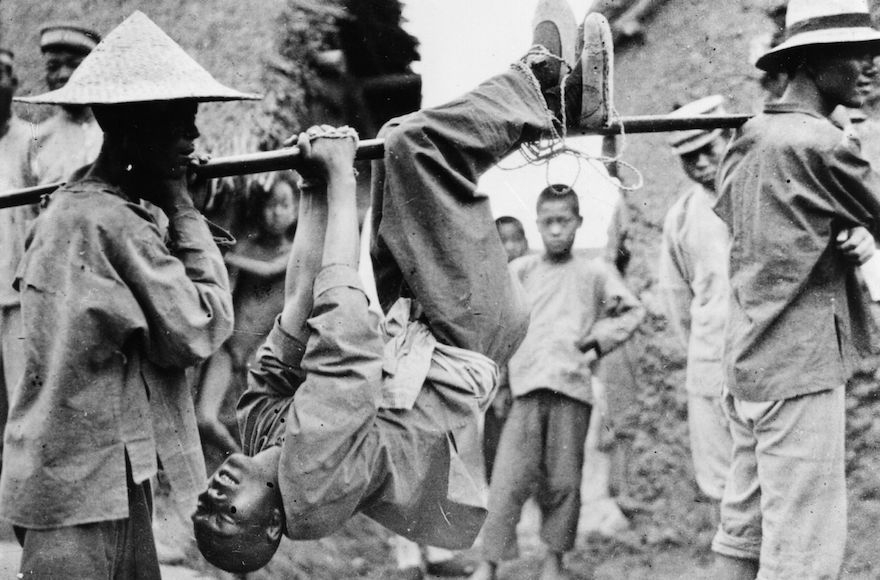 A Cantonese prisoner being handled roughly by his captors in Shantung and Lincheng during the civil war in China. (Photo by Topical Press Agency/Getty Images)
See Original Daily Bulletin From This Date
Advertisement

The Jewish population in Harbin and other places in the Far East is affected very severely by the civil war in China. A large section of the Jews used to obtain their livelihood by selling goods for the Europeans in the Chinese interior. The fighting has made such trading impossible, and no other means of livelihood is available.

War taxes have been imposed, the banks have withdrawn all credit facilities, the exchange is falling, and there is the beginning of a financial crisis. Many bankruptcies have already occurred and there is considerable fear of severe economic suffering.

Eight of the principal cities in the Seaboard Region which includes Maryland, Virginia, North and South Carolina and the District of Columbia are endeavoring to raise their quotas in the United Palestine Appeal.

Hampton, Va., is at present holding its campaign, while Portsmouth, Petersburg and Norfolk, Va., and other communities are making campaign preparations. The campaign for the appeal in Richmond, Va., the quota of which has been set at $15,000, will be launched at a banquet on January 26.

Efforts to make the Federation of Jewish Charfties, of Cleveland, Ohio, a positive welfare body of preventive character, in addition to its remedial nature, were outlined in a review of the activities of the Federation’s Functional Relations Committee.

Among the members of this committee are Rabbi Solomon Goldman, Mrs. Marc J. Grossman, and E. S. Halle.

Facilities and equipment for recreational purposes are to be provided in the new institution.

For the twenty-seventh consecutive term, Adolph Kres was elected president of the Hebrew Friendly Inn and Aged Home of Baltimore, Md., at a meeting of the board of directors.

Other officers elected were I. A. Levin, first vice-president and delegate to the Associated Jewish Charities; Albert A. Esterson, second vice-president; Louis Hurwitz, treasurer; Hyman London, secretary; A. J. Goldstone, chairman of the home; and Ellis Klomtus and Joseph Levy, assistant chirmen of the home.

Enrollment in the Hebrew Union College School for Teachers in New York City, which offers a two years course of study in preparation for Sunday School teaching in Reform Jewish Congregations, begins today.

Owing to the large size of the last entering class, it has been decided to admit only one new class this semester, and to limit the number of entering students to fifty.

Admission to the Hebrew Union College School for Teachers is open to men and women of New York City and vicinity who are High School graduates. The courses are offered free of charge.