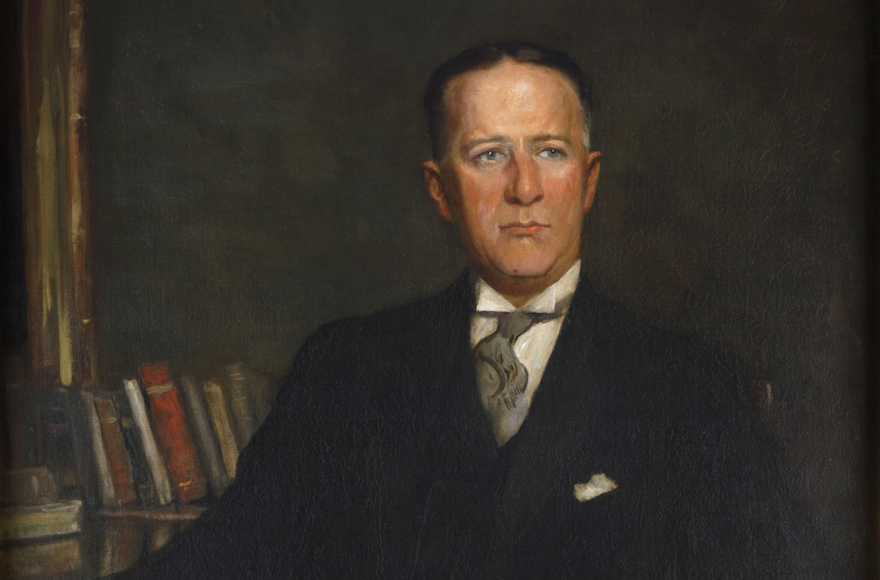 “The minority of intolerant people in our land are soon hushed by the chorus of disapproval which arises when intolerance and hatred raise their voices. True Americanism does not tolerate anything so un-American and unpatriotic as intolerance of any race or any religion.” This was the keynote of Governor Alfred E. Smith’s message issued from the Executive Chambers here to the Jewish population in New York State on the occasion of Rosh Hashanah, beginning the Jewish religious New Year 5687.

“Once again at the approach of the Jewish New Year, I want to extend to the Jewish citizens of the State my cordial and heartfelt greetings. I appreciate the sacredness of the time and have many memories of the deep solemnity with which my old friends and neighbors observed these Holidays.

“In our busy lives it is an inspiring thing to set aside days on which we take thought of our actions and our life during the past year and prepared for the future. Communion with God in the deepest spiritual sense is the basis of all true religion. I profoundly believe in the separation of church and State as a basic American principle and I could not believe otherwise. But I do not believe in the separation of religion from daily life. Each of us observes the requirements of his religion in his own way but together we are all children of the one God. The minority of intolerant people in our land are soon hushed by the chorus of disapproval which arises when intolerance and hatred raises their voices. True Americanism does not tolerate anything so un-American and unpatriotic as intolerance of any race or any religion.

“The Jews are notably a people of peace and in wishing my fellow Jewish citizens of the State of New York a good New Year, I hope that their prayers will join with mine that our Universal Father help us all to strengthen the time-honored American principles of toleration and religious freedom.”

The New York Board of Jewish Ministers issued a New Year message, in which it declared:

“With Rosh Hashanah begins Israel’s most solemn season of the year, culminating in Yom Kippur, the sacred Day of Atonement. It is a hallowed usage in the House of Israel that this season is a time for noting and estimating the individual and the collective situation.

“Crowded synagogues will once more attest to the call of the Faith which summons the Jew to scrutinize his soul and take inventory of his spiritual condition. May the Heavenly Father send light and guidance upon the path of every sincere supplicant who implores help from On High.

“The celebration of the 150th anniversary of American independence brings vividly to mind the privilege as well as the responsibility with which the Jew has been entrusted in this blessed land. He has shared fully in the life of the nation, from its beginning, having made many sacrifices and received many benefits. Among the patriots who achieved the success of the Revolution, the Jewish names were plentiful, though the Jewish population was meager. The Jew therefore feels thoroughly at home in the land which he has helped to defend in times of war and to upbuild in times of peace. He appreciates the bounties, material and spiritual, which he, together with all American citizens, here enjoys; and with the same fervor that he prays for his personal well being, he prays also for the well being of the United States of America, its civil leaders, its citizens, and its institutions.

“The collective situation of the House of Israel abroad gives promise of better things for the coming year.

“The lot of the Jew in Europe and in Palestine is showing measurable improvement. As the European nations regain their composure, the Jew regains his safety. The Peace and Welfare of Israel is intimately bound up with the Peace and Welfare of Humanity. Therefore the Prophetic Proclamation of the Holy Day season, ‘Peace, Peace, afar and near,’ is Israel’s constant prayer.

“May the wounds of sorrow and suffering everywhere be healed.

“May the New Year 5687 bring Peace and Blessing to Israel and to all Humanity.”

The message was signed by Rabbi Israel Goldstein, president of the Board, Rabbi Jacob Dolgenas and Rabbi Jacob Sonderling.

A message of New Year’s greetings, in behalf of the Board of Managers of the National Council of Jewish Women, was issued to its officers and members throughout the United States and Canada, by Mrs. William D. Sporborg of Port Chester, N. Y., president, and Mrs. Estelle M. Sternberger of New York City, executive secretary. This message, addressed to the Council’s membership of more than 53,000 women marks the opening of the organization’s thirty-fourth year of activity in religious, civic, educational and social welfare causes.