600 Tunisian Jews, Who Hid from Nazis in Caves, Liberated by British Troops 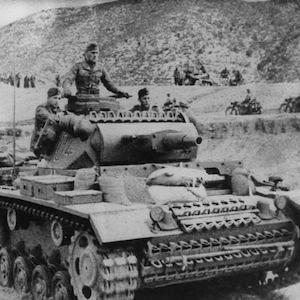 An account of how 600 Jews from Foum Tatahounie, just below the Mareth Line in southern Tunisia, fled to caves in the hills when the Nazi troops entered the town, where they lived for three weeks until the approach of the British Eighth Army forced the Germans to withdraw, is reported in the London press today.

The Jews, who were overjoyed to see the vanguard of Gen. Alexander’s army, told the British troops that only a few persons left the city when the Italians occupied it, but when the Nazis arrived the entire Jewish population fled. Arab tribes living in the hills rented them caves for about $15 each. Meanwhile, in the town itself, the Germans, assisted by pro-Axis Arabs who pointed out which shops belonged to Jews, looted the premises, the British correspondent reports.